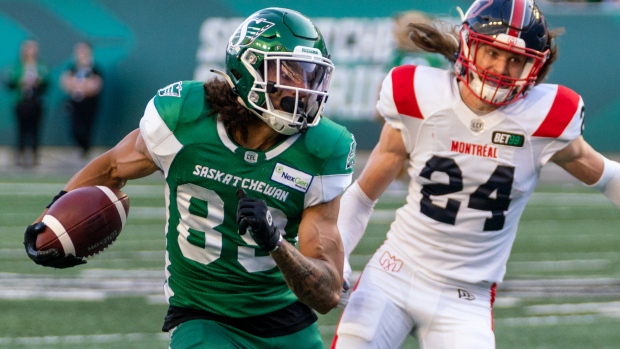 In a league laden with American talent, Saskatchewan Roughriders wide receiver Kian Schaffer-Baker has shown how sky-high the ceiling can be for homegrown talent in the Canadian Football League.

Growing up in Southern Ontario, a region most associated with its production of National Hockey League talent, Schaffer-Baker’s road to the CFL started with a humble upbringing and a soccer ball.

“Yeah, well, growing up, hockey was always the most expensive sport,” said Schaffer-Baker, now in his second CFL season. “My mom, she didn't really have the money to quite afford all the hockey equipment. I remember growing up all my friends played hockey and stuff, but we just couldn't afford it. So I played soccer for a little while growing up because that was the cheaper option. But then I got introduced to football through my older brother.”

Schaffer-Baker carried this passion for football throughout high school, where he starred at Our Lady of Mount Carmel Secondary School. His love for the game was not confined to the academic year, as he played summer football for the Mississauga Warriors of the Ontario Varsity Football League. There, he led the varsity division team with 31 catches for 437 yards and nine touchdowns.

When it became time for Schaffer-Baker to play at the collegiate level, he wasn’t presented with many options.

“I had some offers to go down for some camps, but my mind just kind of got just distracted from that, I guess," said Schaffer-Baker on the possibility of playing in the NCAA. "Looking back at it now, I wish that was something I did pursue. But I would have had (to have) gone back to like a fifth year of high school and just at the time, everyone was just saying, ‘oh, go to a Canadian university get (and) good academics.' And so that was the route I took."

The Mississauga native decided to stay in Ontario, making the short trip to the University of Guelph, where he spent four seasons (2016-19), playing in 28 games, recording 95 receptions for 1,544 yards and eight touchdowns.

Schaffer-Baker came onto the scene in 2019 following his performance in the 2019 East-West Bowl, where he led all receivers with five catches for 126 yards and a touchdown. Despite recording good testing numbers in the 2020 Ontario Regional Combine, he did not receive an invite to the 2020 CFL Combine. Once the draft came, Schaffer-Baker fell to the fourth round, where he was selected by the Roughriders with the 30th overall pick.

Adversity reared its ugly head early in his time with the Riders as the COVID-19 pandemic forced the CFL to cancel its 2020 season, pushing Schaffer-Bakers’ professional debut with the Roughriders on hold.

After a year of waiting, spending time on the Roughriders' practice roster, and some untimely injuries to Roughriders’ receiver Shaq Evans early in the pandemic-shortened, 14-game 2021 season, Schaffer-Bakers’ time to shine came in Week 3 against the Ottawa Redblacks. And it’s a moment he hasn’t forgotten.

Schaffer-Baker dazzled in that start on his home turf in front of 28,559 fans who cheered him on as he hauled in four receptions for 64 yards, playing a crucial role in the Riders’ 23-10 win. He went on to score his first CFL touchdown in his fourth game of the season, collecting a pass from Cody Fajardo for a 48-yard touchdown as part of a 99-yard performance.

Looking back at those moments and the support he is shown now, Schaffer-Baker talked about the support from Rider fans and how it's unlike anything he’s ever experienced.

“There's no greater feeling in the world than getting out to come and play in front of Rider Nation. From the moment you walk in through the doors, you got people all lined up outside yelling and cheering through the moment the game's over and you're leaving the stadium you still got people outside cheering and waiting for autographs. It's the real deal experience you know there is no crowd you'd rather be playing in front of.”

Schaffer-Baker finished his rookie campaign seeing action in 12 games, where he recorded 47 receptions for 563 yards and two touchdowns – the second most on the team and was named the Roughriders Rookie of the Year for his efforts.

As he embarked on his first off-season as a pro, Schaffer-Baker capitalized on the warm weather the south has to offer as he aimed to take a leap in his second season with the Green and White.

“This off-season, I was actually able to get out. I had to get out of the cold from Toronto because going into the field every single day and try to shovel snow is not always fun. So I was able to get out to Florida with my one trainer – who's the strength coach for the (Toronto) Argos. We had a good group go down there, and then I also went down to California with our receivers’ coach (Travis Moore) and Shaq (Evans). So we were all out in California training together, and they were pushing me to my limits and making me a better player. So I'm just grateful for that experience.”

Schaffer-Bakers' meteoric rise comes at the same time as division rival BC Lions quarterback Nathan Rourke's, who was recently named one of the league's top performers for the third straight week. With the attention and praise Rourke has been receiving, Schaffer-Baker has seen his fair share of it being a Canadian.

“No, no, not at all,” said Schaffer-Baker on if the pressure of being a Canadian receiver has ever got to him. “It's funny because it's almost vice versa. Even though it is a Canadian league, they don't really look at it as that. It's still more like an American-dominated league. So it's kind of more so pushing and creating a new path for Canadians that are coming to show that this is our league.”

When asked if he believes the CFL is on the cusp of a wave of great Canadian talent, Schaffer-Baker strongly agreed.

With 426 yards and three touchdowns on the season, Schaffer-Baker ranks second on his team in offensive production and 17th in the league through 10 weeks, making himself, Kurleigh Gittens Jr. and Nate Behar the lone Canadians in the top 20.

Though individually Shaffer-Baker is having a coming-out party, he is still focused on the success of his team.

“First thing that comes to mind is: (the) job's not finished. And we're only at the halfway point. There's still so much more this season to keep learning from and keep getting better with. So I'm excited to just keep moving forward especially with this group of guys because I know they're going to help me become the best player and I'm going to push them to become the best player they could possibly be.”