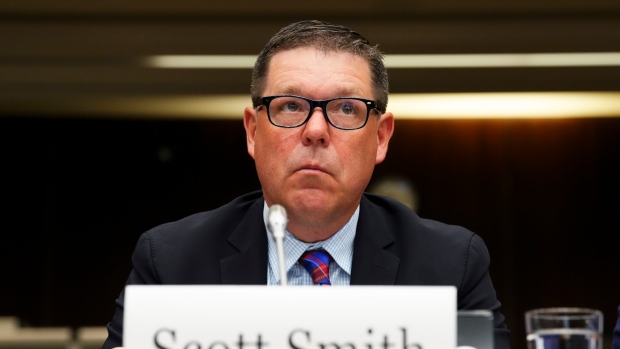 Prime Minister Justin Trudeau says Tuesday's development took too long to materialize — and the departures are only a "first step" on the road to transforming the sport in this country.

NEWS | Hockey Canada has made significant changes to its leadership team.

"There's a culture to change," Trudeau told reporters in Sorel-Tracy, Que. "There is an awful lot of work to ensure that the structures and systems that Hockey Canada has in place protects employees, protects Canadians, protects our kids as they play hockey."

Hockey Canada announced hours earlier that Scott Smith is out as president and CEO, while the board of directors resigned.

Here is my statement on the resignation of the leaders of Hockey Canada: pic.twitter.com/aaOu4GqN1g

Smith spent nearly three decades climbing the organization's corporate ladder, but lasted just over three months at the top following a scandal-filled spring and summer that rocked the institution to its core.

He was unable to survive the fallout related to Hockey Canada's mishandling of assault allegations and how settlements were paid out — revelations that both enraged the country and opened yet another conversation the sport.

Hockey Canada said in a statement an interim management committee will guide the organization until a new board, which is set to be elected in December, appoints Smith's successor.

Hockey Canada said the outgoing board recognized "the urgent need for new leadership and new perspectives" in stepping down.

"The interim management committee must be made up of people who want to make real change," she said in a statement.

"We expect Hockey Canada to actively work toward a team whose expertise will contribute to better support and training for players, and an environment exempt from sexual violence and discrimination."

Smith and the outgoing board follow former chair Michael Brind'Amour, who resigned in August, and interim chair Andrea Skinner, who stepped down Saturday, as casualties at an organization that has seen politicians, including Trudeau, call for change as corporate sponsors jumped ship.

He added it's his belief that when Skinner and Brind'Amour appeared before committee last week — the third time Hockey Canada officials have been called to Parliament Hill since June — they and other members of the leadership thought the storm could still be weathered.

Instead, the heat turned up even further following a disastrous showing that saw the organization further dig in its heels and back Smith.

"If the heritage committee had not gone as badly as it did last week for Hockey Canada, I don't think this would have happened," Housefather said in an interview with The Canadian Press. "Their intent on the way to the meeting was to tell everybody that the media was all wrong and they were being scapegoated and they were fine.

"The meeting and everything that followed from it has led to this."

A number of high-profile corporate sponsors either paused completely withdrew funding as a result.

Tim Hortons, which said last week it would not be funding the men's program for the upcoming season, called Tuesday's changes "a first step for Hockey Canada in doing what's required to restore the faith and trust of Canadians."

"We will not consider reinstating our support of Hockey Canada's men's programming until we're confident that process is being made and Canadians once again believe in the organization's leadership and its ability to do what's right for the game we all love," the company said in a statement.

NDP MP Peter Julian said Tuesday the scandals resonate because legislators have never before moved "to ensure accountability and transparency, and a zero-tolerance policy on issues of sexual abuse and sexual violence."

"The federal government needs to step up," Julian said in an interview. "For all of the national sports organizations that have basically been able to do what they want with no government oversight for far too long."

St-Onge has said the government is looking to overhaul its own policies so her department is not just a funder of sports, but can do more to ensure sporting organizations are accountable for their actions.

Smith took over from outgoing CEO Tom Renney on July 1 after a succession plan was announced in April, but Hockey Canada's world started to crumble shortly thereafter.

TSN was first to report in May an undisclosed settlement had been paid to a woman who alleged in a $3.55-million lawsuit she was sexually assaulted by eight players — including members of the country's world junior team — after a 2018 Hockey Canada gala in London, Ont.

Smith, who previously served as both president and COO, and the soon-to-be-retired Renney were grilled during what would be the first committee meeting looking into Hockey Canada in June.

MPs were stunned by what they viewed as a the lack of transparency and accountability. Hockey Canada subsequently had federal funding cut off, while a number of corporations paused sponsorship dollars.

Hockey Canada issued an open letter in July that contained a number of promises, including a pledge to reopen a third-party investigation into the 2018 alleged assault and a full governance review.

Then days before the release of an "action plan" to address safe sport issues, Hockey Canada announced members of the 2003 world junior team were being investigated for a group sexual assault.

Hockey Canada officials testified to parliamentarians in July the organization had doled out $7.6 million in nine settlements related to sexual assault and abuse claims since 1989, not including this year's payout to the London plaintiff.

Smith again testified before the heritage committee in July during a meeting where he repeatedly resisted calls for his resignation.

Police in London, meanwhile, have reopened the investigation into the 2018 incident. The NHL is also conducting an investigation. None of the allegations have been proven in court.

The calls for Smith's ouster grew louder last week in the wake of the most recent committee meeting after Hockey Canada's former and current board chairs backed the executive, with Skinner adding the sport should not be made a "scapegoat"' for toxic culture that exists elsewhere in society.

The response to those comments was swift, with provincial organizations pulling funding and a number of corporate sponsors — including Tim Hortons, Canadian Tire and Nike — either pausing or fully withdrawing millions in sponsorship dollars.

Bauer vice-president of global marketing Mary-Kay Messier said the company, which paused portions of its sponsorship hours before Hockey Canada's leadership change was announced, tried to work behind the scenes.

"Our plan was to hopefully be able to enact change," she said. "Our meetings led us to believe that that was not going to happen."

Trudeau mused last week about replacing Hockey Canada with another national body, while Nova Scotia's premier said he needed to see significant change for his province to follow through on plans to host the upcoming world juniors in Halifax and Moncton, N.B.

The dominoes finally started to fall over the weekend when Skinner resigned before Smith and the rest of the board exited Tuesday.

"There's work to do to transform the culture at Hockey Canada," Trudeau said. "But today was an important first step."

-With files from Mia Rabson in Ottawa, Morgan Lowrie in Sorel-Tracy, Que., John Chidley-Hill in Toronto and Brett Bundale in Halifax.

This report by The Canadian Press was first published Oct. 11, 2022.

The Hockey Canada Board of Directors has announced important changes to Hockey Canada’s leadership team. Effective immediately, it announced the departure of chief executive officer Scott Smith. The entire Board has also agreed to step down to make room for a new slate of directors.

An interim management committee will be put in place, which will guide the organization until no later than a newly constituted Board appoints a new CEO to lead the organization.

Recognizing the urgent need for new leadership and perspectives, the entire Board of Directors announced it will step aside and pursuant to Hockey Canada’s By-Laws, the Board will ask its Members to select a new slate of directors by no later than the forthcoming virtual election scheduled for December 17, 2022. The Board will not seek re-election and will fulfil its fiduciary duties until such time as a new Board is elected.

Hockey Canada is seeking board candidates to shape the future of the organization. We encourage qualified individuals to respond to the call for nominations issued by the independent Nominating Committee last week.

The interim Management Committee will focus on day-to-day operations and ensure progress on the implementation of Hockey Canada’s Action Plan, including reviewing and working with the Board and Members towards the full implementation of the independent governance review recommendations from The Honourable Thomas Cromwell, C.C., former Supreme Court Justice as well as working to facilitate the effective transition to a new CEO and Board.

Hockey Canada will continue to provide public updates on these important changes as well as the continued work towards implementing its ongoing Action Plan.