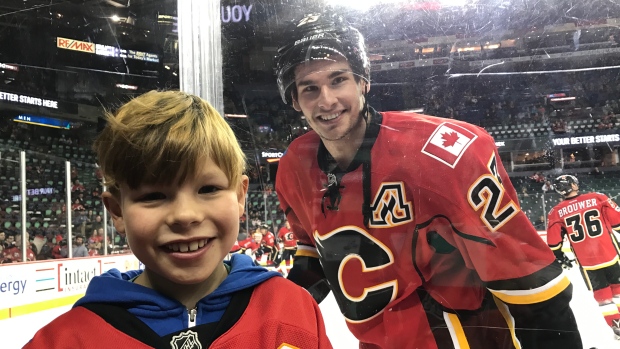 Mason Rodriguez with Sean Monahan before a game during the 2016-17 season. , Courtesy of: Jenn Rodriguez

Sean Monahan wrote his name all over the franchise record book during his nine-season tenure in Calgary, but it’s the relationships he built beyond the ice that should ultimately define how he is remembered in the city.

Monahan, the sixth-overall pick in 2013 who made the Flames as a 19-year-old in the 2013-14 season, suited up for 656 games with the team before departing last off-season. Now a member of the Montreal Canadiens, he returns to the Saddledome for the first time on Thursday.

Although he’s among the franchise leaders in games played, goals, and game-winning goals, the centre’s legacy in the city that embraced him can be encapsulated in his friendship with 15-year-old Flames fan Mason Rodriguez.

In 2014, then six-year-old Mason was diagnosed with Stage 4 Burkitt lymphoma and had to undergo five rounds of chemotherapy.

At a Calgary Flames Foundation fundraising golf tournament two years later, with Mason’s cancer in remission, the Rodriguez family shared their story. Monahan was Mason’s favourite player and the foundation sat them at the same table. The two instantly connected and a genuine friendship was born, one that went beyond the sport.

Monahan brought the entire Rodriguez family out to several Flames games that season, and made an effort to be part of their lives, including calling Mason on his birthday every year.

“He had come over to our house for dinner, him and Brittany [Monahan’s then-girlfriend, now wife],” said Jenn Rodriguez, Mason’s mother.

Monahan heard Mason shooting pucks in the backyard and wanted to join in.

“As soon as he heard my dad and I shooting pucks, he grabbed his stick and ran back to come play with us,” Mason.

Monahan even went to one of Mason’s minor hockey games and gave the kids a pep talk.

“He was super awesome about meeting anybody who walked up to him and wanted a picture or an autograph with him,” Jenn said. “He was super patient and talked to all the kids and was super involved in watching the game. He kept saying to my husband Diego and I, ‘Man, I miss this. This brings back so many memories for me. I just absolutely love it.’”

Monahan was involved in the community in other ways as well. He was an ambassador for Big Brothers and Big Sisters, hosted bingo nights and other events for the Ronald McDonald House, and visited patients in hospitals.

Former teammates also applaud Monahan for his character and toughness. He was unable to play in the playoffs for Calgary last season because of his second hip surgery, and has battled several injuries throughout his career.

This year, he is finally healthy - and thriving for a young Montreal Canadiens team after Calgary traded him, along with a first-round pick, for salary cap flexibility to sign Nazem Kadri. So far, he has 14 points in 21 games for the Canadiens.

Gaudreau, who played with Monahan for eight seasons, said he would have to show up to the rink hours before other players for his treatments, but always had a positive attitude and never complained.

“Me and Monny, in the game he’s probably one of, if not my best, friends,” Toronto Maple Leafs defenceman Mark Giordano said. The two played together for nine seasons.

“He didn’t get enough credit. He’s a guy that didn’t want to take a night off, no matter what. He was definitely playing through some pretty significant injuries…when we played them, it looked like he was moving really well, flying around out there. I’m really happy to see that for him.”

“He’s such a good person, good teammate,” Gaudreau added. “He’s a leader. When you see a guy like that going through what he went through, it’s hard to watch. I’m really happy to see how well he’s doing now…he said he could skate like he was 22 again.”

Gaudreau and Monahan, who was born in Brampton, Ont., remain close.

“I went to dinner with him the other night,” Gaudreau said. “He got to meet my daughter who was just born, got a picture, me and him and he was holding her. That was awesome…Toronto’s so close to Columbus, I tried to convince him to tell his parents to come out and watch the games. My parents are out here too, so they’d be able to see each other again.”

Gaudreau, who has his own Calgary homecoming when the Blue Jackets visit in January, anticipates a strong reception for his friend on Thursday night.

“You never know if fans are mad at you,” Gaudreau said. “I’m sure Monny will get a very big cheer.”

The Rodriguez family will try to make it to the game to meet their old friend and be part of that salute.

“We’re Sean Monahan fans,” Jenn said. “We’re cheering for Sean…He’s been a really supportive person for Mason. We honestly think the absolute world of Sean Monahan. He truly is the nicest human being.”