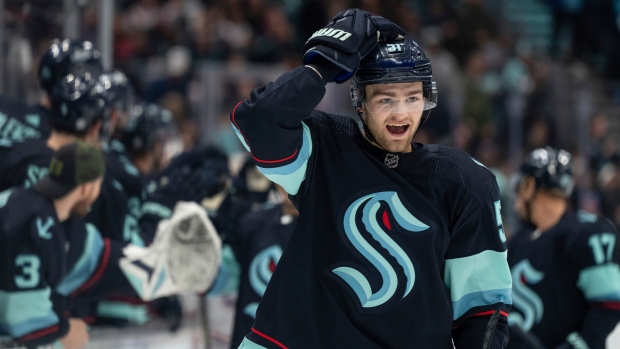 The Seattle Kraken have loaned forward Shane Wright to play for Team Canada at the upcoming World Junior Championship in Halifax and Moncton.

Wright, 18, is expected to report to Team Canada in Moncton on Thursday, according to TSN Hockey Insider Darren Dreger.

The 6-foot centre is fresh off scoring his first NHL goal on Tuesday night against the Montreal Canadiens in a 4-2 loss for the Kraken. He has a goal and an assist in eight NHL games this season. He had four goals in five games during a conditioning stint with the AHL's Coachella Valley Firebirds.

Drafted fourth overall by Seattle in June, Wright is the sixth player in Canadian Hockey League history to be granted exceptional status to join the OHL a year early. He won CHL Rookie of the Year in 2020. The Burlington, Ont., product had 32 goals and 62 assists in 63 games with the Kingston Frontenacs in 2021-22.

Internationally, he captained Canada to gold at the 2021 IIHF U18s, where he was second in tournament scoring with nine goals and 14 points in five games. Wright was named to the 2022 World Juniors team but only played in two games before it was cancelled. He did not participate in the rescheduled tournament in August where Canada won gold.