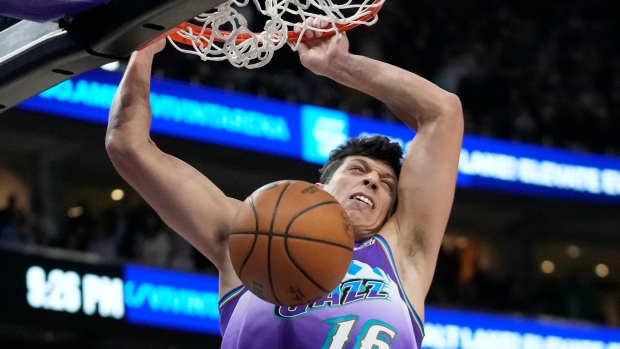 “I couldn’t imagine anything like that. Just an amazing feeling, really happy and excited the way we got there,” said Fontecchio, who may have only been on the court because Collin Sexton left the game with a sore hamstring.

Fontecchio finished with a career-high 18 points. A rookie from Italy who will be 27 on Friday, he made four 3-pointers. Jordan Clarkson led Utah with 22 points.

Jordan Poole tied a season high with 36 points for Golden State and Jonathan Kuminga had a season-high 24.

“We were supposed to win that game. Just things that happen," Kuminga said. "The NBA is crazy because out of 82 games, there’s always going to be a game just like that that you’re just going to ask yourself, ‘What happened?’”

But Malik Beasley, who had 18 points for Utah, made a 3-pointer with 7.8 seconds to play. Alexander-Walker then slapped the ball away from Poole, Beasley picked up the loose ball and threw it ahead to Fontecchio sprinting to the basket.

With Golden State leading 121-119, Kuminga blocked Clarkson’s jumper in the lane with 24.9 seconds remaining and then tangled with the Utah guard in the resulting scrum. The players went after each other, but were quickly separated by officials and teammates.

Clarkson was whistled for a loose ball foul before an official review determined he committed a Flagrant 2 foul.

Clarkson ripped off his headband in disgust and exited the court.

“I didn’t do anything. I literally just held him up,” he said.

Kuminga and Beasley were assessed technical fouls and Kuminga made one of two from the line.

“You got to close it. You got to be rock solid with the ball. You got to be smart defensively. We were neither of those things the last 13 seconds,” Golden State coach Steve Kerr said.

Klay Thompson had 22 points for the Warriors.

Walker Kessler, another first-year player, got his first career start with the Jazz and had 10 points, 12 rebounds and a career-best five blocks.

The Jazz have thrived on chaos all season but they’ve failed to execute last-minute plays in two of their recent losses. This time around they brought the madness to the finish.

“I continue to be amazed by our team’s resilience. They never flinch in weird moments of the game or odd lineups,” Utah coach Will Hardy said. “We are imperfect, but we’ve got heart. The end of the game reflected that.”

Jazz: Rudy Gay returned after missing 11 games with a sprained left hand. … Clarkson had nine assists. … The Jazz shot 53.5% from the field.