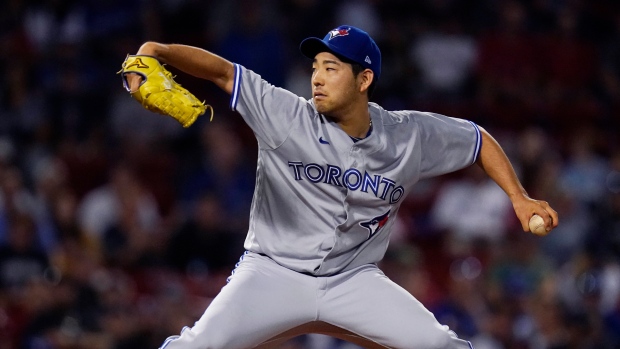 Yusei Kikuchi has a great arm. He’s a left-hander who can throw his fastball 95 mph. But he walks too many batters.

There are 166 pitchers in Major League Baseball who have thrown more than 1,000 pitches this season. Kikuchi has the sixth highest pitches per innings (18.58) among that group. He is a nibbler, trying to miss bats instead of attacking hitters. This leads to too many deep counts and, ultimately, too many hitter’s counts and base on balls.

Kikuchi’s career numbers are like those of Robbie Ray before Ray’s great season with the Jays earned him the 2021 AL Cy Young Award. Ray was always a guy with a great arm who didn’t throw enough strikes. Every team wanted him and believed they could fix him.

Clubs felt the same way about Kikuchi. It was the success that Toronto pitching coach Pete Walker had with Ray that led to the Jays signing Kikuchi. The Jays saw similar stuff and solvable issues, believing it was worth giving the lefty a three-year deal. But the changes and improvements have come slowly for Kikuchi this season. He is not Ray – yet.

The Jays recently moved Kikuchi to the bullpen. I’ve seen a move like that help starting pitchers who don’t throw enough strikes. They move to the bullpen, and it triggers aggressiveness. Starters who become relievers feel their fastballs play up in velocity, so they attack the strike zone with their new-found confidence.

That hasn’t happened yet with Kikuchi. In his first two outings as a reliever, he has thrown a total of 45 pitches but only 20 strikes. At this stage, he can only be used when the team is up or down by more than five runs. He needs that margin for error.

The Jays will have to consider sending Kikuchi to the minors to get fixed if he doesn’t make an adjustment within his next couple of outings. It’s a last resort, but that moment is approaching soon. The Jays don’t want to humiliate him, but he may need a wake-up call. It isn’t working his way, so it’s time to change. Time will tell.

The Blue Jays won three of four games against the Yankees in the Bronx last weekend. The Yankees were able to win the Sunday game, which gave them some momentum heading into the week to face the New York Mets in interleague play.

The Yankees went on to sweep the two-game series versus their crosstown rivals. Now they are set to play a couple of sub-.500 teams in the Oakland A’s and Los Angeles Angels. The Yankees are just 14-20 since the all-star break, including their current four-game win streak.

They are not out of hot water, yet. The Yankees have been struggling offensively and their bullpen has been a mess. They got a couple of excellent performances in their recent wins but are significantly undermanned with all their injuries. The Yankees currently have seven relievers on the IL. Slugger Giancarlo Stanton returned from injury on Thursday, while Matt Carpenter is likely lost for the season with a broken foot.

The Yankees still have a seven-and-a-half game lead over the Tampa Bay Rays and an eight-game lead over Toronto in the AL East race. It is going to be tough to catch them.

The American League wild-card race is shaping up to be intriguing down the stretch.

Tampa Bay is currently the No. 4 seed (top wild-card team), a game ahead of the Jays and two games up on the Seattle Mariners. The Baltimore Orioles are two-and-a-half games behind the Seattle Mariners but are still in the race. I don’t believe the Orioles will be able to maintain this pace and will start to fade away.

As it currently stands, that means a matchup on the road against the Rays as the second wild-card team or travelling to Cleveland to face the Guardians as the third-wild card team. I would much prefer to play the Guardians if I had the choice.

It’s very much the same situation in the National League. The Dodgers and Mets are going to be the top two division winners, while the Cardinals are currently the NL Central leader. The wild-card teams, in order, are the Braves, Phillies and Padres. I would do all I could to avoid having to play the Braves on the road in Atlanta in the wild-card series. So again, being the third wild-card team is much more favourable than being the second, as the second team would draw the Cardinals in the first round.

It will be interesting to see how teams manage games in the final week, trying to put themselves in the most favourable position when considering matchups and momentum.

- I don’t know if he is going to get there, but I’m rooting for Cardinals slugger Albert Pujols to hit seven more home runs to reach the 700-homer mark. He is currently just three behind Alex Rodriguez (696) who is fourth on the all-time list.  The challenge Pujols faces is that he usually only starts against left-handed pitchers. It’s unclear whether he will get enough opportunities to hit seven more. He’s said this is his last season, but there is a part of me that hopes he gets to 699 and decides to come back next season – not only get No. 700 but also move beyond Babe Ruth’s 714 total.

- Cardinals first baseman Paul Goldschmidt is making it clear that he is the NL MVP. He’s leading the league in batting average and RBI and is second in home runs (two behind Kyle Schwarber). He has led the Cardinals to the top of the NL Central where they have extended their lead to six games over the Milwaukee Brewers. He also has a legitimate shot at the first Triple Crown in the NL since 1937. In the world of analytics, they use different categories for the Triple Crown. They use on-base percentage, slugging percentage and offensive WAR. Goldschmidt is leading the NL in all those categories. Either way, he is having a remarkable season.

- The New York Mets have held off the Atlanta Braves so far this season. The Braves got off to a slow start but have the best record in baseball since June 1. They are just two games behind the Mets and their footsteps are loud. Last year, the Mets led the division for over 100 days until the Braves passed them in early August and never looked back. The Mets are hoping for a different result this year. The next three-plus weeks will go a long way towards determining whether the Mets win the division. Thursday was the start of a 23-game stretch for in which they play games 20 against sub-.500 teams. This is where they need to build their margin of error for the last three weeks of the season. The Mets host the Braves the final weekend of the season and will hope to have at least a four-game lead by then.

- Two rookies did something that had never been done before on Wednesday. Pirates’ 6-foot-7 shortstop Oneil Cruz laced a single off the wall at 122.4 mph. It was the hardest-hit ball ever registered in the tracking era. Mariners’ pitcher George Kirby started a game by throwing 24 straight strikes. It is a reminder that we are in one of the most remarkable eras in baseball history. There are so many young players who immediately impact the game in record-setting ways. I suspect we will be hearing about these two young players for years to come.