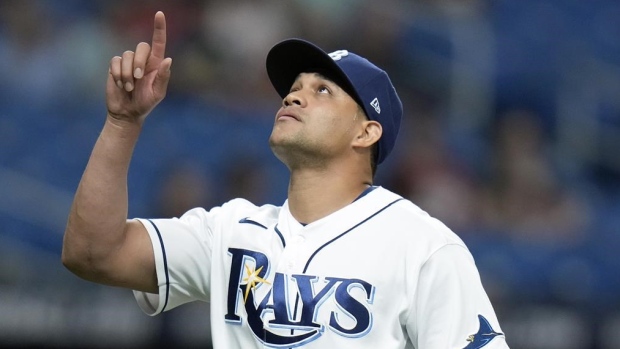 The 28-year-old right-hander pitched three spotless innings in relief to win his first outing in more than two years, leading the Tampa Bay Rays to a 1-0 victory over the Boston Red Sox.

Taylor Walls drove in the only run with an infield single in the fifth, and the Rays won for the eighth time in nine games. They lead the American League wild-card race and are five games behind the first-place Yankees in the AL East after New York swept a doubleheader against Minnesota.

Chirinos (1-0) gave up four hits and a walk while striking out four. He had Tommy John surgery following his previous appearance for the Rays on Aug. 16, 2020, then endured a serious setback during his recovery when he fractured a bone in his elbow.

"There was a lot of tears of sadness, especially after that second surgery. Now there are tears of happiness,” Chrinos said through a translator. “To be able to walk in and compete and help the team win, that’s all I want to do.”

The emotional high point came after his first inning, which Chirinos ended with consecutive strikeouts of Christian Arroyo and Rob Refsnyder with two runners on base. The reliever hopped off the mound in celebration.

“It’s genuine, authentic emotion for himself, and he’s earned it. Two years is a long time,” said Rays manager Kevin Cash, who thought Chirinos exceeded expectations after a big league absence of 751 days.

“He had to make some big pitches because there were a couple of first-and-second situations,” Cash said. “He got into some pretty high leverage. You’re talking about a 0-0 and 1-0 ballgame. So there wasn’t too much room for error.”

Pete Fairbanks pitched the ninth for his sixth save in six attempts.

Boston starter Nick Pivetta (9-11) went to full counts on 10 of the first 13 hitters he faced and threw 105 pitches in just five innings. But he did not give up a hit until Francisco Mejia led off the fifth with a double. After Mejia advanced on a long fly ball, Walls hit a bouncer into a shifted infield and beat it out, driving in the run.

“Our plan was to get (Pivetta) out of the game early,” Mejia said. “Obviously we weren't able to do that, but we got the one run that won the game.”

Walls, the Rays' light-hitting shortstop, had two of Tampa Bay's four hits. He also stole a base and made the game's best defensive play, robbing J.D. Martinez of a hit in the sixth.

The Red Sox stranded 10 runners and lost for the 12th time in 16 games against the Rays.

Red Sox: OF Franchy Cordero (severely sprained right ankle) was placed on the 60-day injured list and OF Abraham Almonte was called up from Triple-A Worcester. ... SS Xander Bogaerts, who left Tuesday night's game with back spasms, was out of the lineup as a precaution. ... RHP Nathan Eovaldi, sidelined since Aug. 12 due to right shoulder inflammation, threw a bullpen.

Rays: Brandon Lowe was reinstated to the active roster. He spent 10 days on the injured list after being hit by a pitch on the left elbow. ... RHP Tyler Glasnow (Tommy John surgery) struck out two in one inning of a rehab start for Triple-A Durham, throwing 19 pitches.

Bogaerts told manager Alex Cora early Wednesday that he wanted to play. But with the Red Sox nine games out of wild-card position with 25 left to play, the manager figured another day off made more sense.

“I appreciated that, but we’ve got to be smart and protect players,” Cora said. "He'll have today and tomorrow off and get back Friday. We know where we’re at and we’ve just got to be smart. Like with Trevor (Story), Friday’s an off day regardless.”

Starting with a weekend series at Yankee Stadium and a five-game series in Toronto, the Rays will play 21 of their remaining 27 games against teams in playoff contention.

“We’re facing everybody that is either going to go to the postseason or is vying for a wild-card spot,” Lowe noted. “We’re not playing any games that don’t matter. ... Every game right now means something and that’s going to help us prepare for the postseason.”

Rays: RHP Drew Rasmussen (9-4, 2.70 ERA), who missed his scheduled start Tuesday for the birth of his son, will start Friday night's opener of a three-game series at Yankee Stadium.