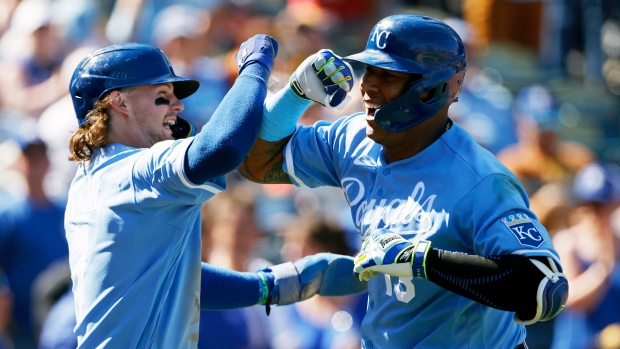 Salvador Perez also went deep for Kansas City, and Hunter Dozier had four of the Royals' 18 hits. Nick Pratto drove in three runs, including a two-run double off Josh Hader during a six-run eighth.

Kansas City had dropped the first two games of the series and 11 of 15 overall.

Jonathan Heasley (2-7) struck out seven in five innings in his first win since June 10. He was charged with three earned runs and four hits.

“Overall I thought it was a pretty good outing,” Heasley said. “I had a couple pitches that hurt, but overall I felt like my command was better than my last start.”

Manny Machado homered twice and drove in four runs for San Diego, which had won four of six. Juan Soto connected for his third homer with the Padres, and Josh Bell added an RBI single in the ninth.

The Padres were unable to overcome a shaky performance by Sean Manaea (7-7), who was tagged for six runs and 10 hits in four innings.

Kansas City jumped all over Manaea for five runs in the first. Taylor led off with a drive to left for his seventh homer, tying it at 1. Brent Rooker and Nicky Lopez each had an RBI single, and Drew Waters doubled home Pratto.

“I felt like we did a good job of putting together good at-bats,” Taylor said. “When we got the line moving we just tried to keep it moving, just trying to get it to the next guy.”

Perez’s 18th homer — a two-run shot to left-center in the sixth — lifted the Royals to an 8-4 lead. Despite two stints on the injured list totaling 31 games, Perez is tied for the team lead in homers.

The Padres pulled within three on Soto's two-run shot in the seventh against Anthony Misiewicz. Soto, who was acquired in an Aug. 2 trade with Washington, has 24 homers overall this season.

The Royals then put together a six-run eighth on the way to their highest scoring game of the season. Taylor singled home Pratto and Waters before Bobby Witt Jr.'s sacrifice fly made it 15-6.

“It was nice to see how the guys played today," Royals manager Mike Matheny said. “We saw multiple good at-bats by multiple guys and everybody in the lineup. A couple guys came in even off the bench and contributed.”

Machado hit a solo shot in the first and a two-run homer in the fifth for his 32nd career multihomer game.

Kansas City will travel to Chicago to face the White Sox on Tuesday. The Royals have not announced a starter.