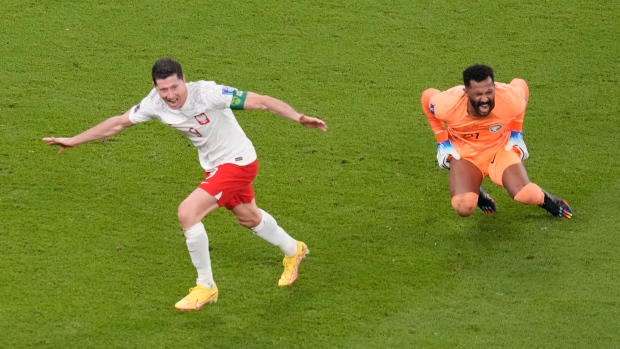 LaLiga Santander is still on a hiatus due to the World Cup, but there are still many headlines from across the world of Spanish football. Here’s all you need to know.

After one full week of World Cup action, several LaLiga stars have caught the eye in Qatar. The various LaLiga players in Spain’s squad impressed as La Roja defeated Costa Rica 7-0 and then drew 1-1 with Germany to stay top of their group, while Atlético de Madrid’s Antoine Griezmann is dazzling for France, Real Valladolid’s Gonzalo Plata is playing a key role in Ecuador’s lively attack and Luka Modrić is once again captaining Croatia to victory.

One player who deserves a special mention is Robert Lewandowski, as the current LaLiga Santander top scorer netted his first ever World Cup goal this past week, contributing to Poland’s 2-0 win over Saudi Arabia. The FC Barcelona forward now has 77 goals for his country, and this was clearly one of the most special.

FC Barcelona and Spain’s Gavi also made headlines this past week, winning the Player of the Match prize for his excellent performance against Costa Rica. The midfielder scored a beautiful goal in that game too, which made him the third-youngest World Cup goalscorer of all time, at 18 years and 110 days of age. Only Pelé and Manuel Rosas have scored at a younger age in the history of the tournament.

Even though LaLiga Santander has paused during the World Cup, there is still a lot of professional football to enjoy in Spain as LaLiga SmartBank is continuing. This past weekend, UD Las Palmas demonstrated that they are serious promotion contenders, holding onto second place by defeating CD Tenerife 3-1 in a passionate Canary Islands Derby.

Iago Aspas once again showed his commitment to RC Celta this week by returning from holiday four days earlier than expected. The Galician club will start working out again on Monday, following a period of rest due to the World Cup pause, but the star forward was back at the club’s facilities on Thursday, showing how keen he is to hit the ground running when LaLiga Santander returns.

Carvalhal gets down to business

RC Celta’s new coach Carlos Carvalhal is also determined to make a positive start once the competition resumes. The Portuguese manager oversaw one defeat and one draw in the two LaLiga Santander matches he coached just before the pause, but has been preparing a new workout plan for the mini pre-season that the team will have in Vigo and in Portugal.

Aperribay is preparing for another term as Real Sociedad president

This coming Tuesday, Real Sociedad will hold its General Shareholders’ Meeting and, given that there is no other candidate standing against the incumbent Jokin Aperribay, the 56-year-old is set to stay on for another term. He has been in the post since 2008 and has helped transform the Basque club on and off the pitch.

Real Madrid press ahead with the Bernabéu works

Real Madrid are making the most of the pause in competition to continue the redevelopment work at their Estadio Santiago Bernabéu, with the exterior façade taking shape. The club also reached an agreement with the local authorities this past week to begin a major modernisation project for the stadium’s Metro stop.

There was sad news at Atlético de Madrid this past week, as one of the most beloved figures at the capital city club passed away. Lázaro Albarracín, who had been vice-president since 1988 and who had contributed to some of the club’s greatest successes, died at the age of 93.

This week, PUMA and LaLiga presented the new ORBITA Yellow Ball, which will be used in LaLiga Santander and LaLiga SmartBank matches played over the coming months. It is a vibrant yellow colour, with lilac and purple highlights, and has been designed to ensure maximum visibility of its trajectory.