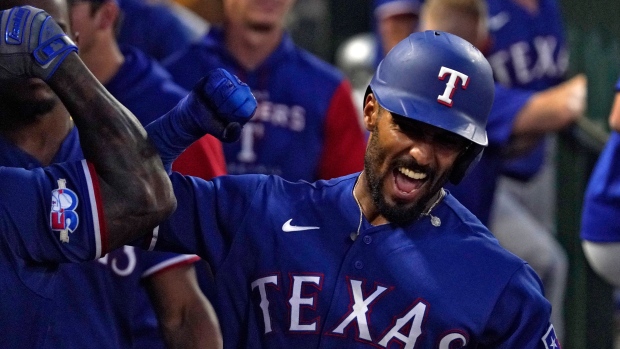 ARLINGTON, Texas (AP) — The Texas Rangers expect to win in 2023, which has long been part of their plan. There was also an expectation to be better this season.

“We've said pretty clearly we expect to take a step forward this year,” team president Jon Daniels said. “We had hoped that we could maybe overachieve a little bit and be in playoff contention."

Instead, the Rangers (48-60) were a season-worst 12 games under .500 on Monday, their first day off since a shortened All-Star break. Texas hasn't had a winning record at any point in 2022, since its record spending spree last winter when a half-billion dollars was committed in free agency to middle infielders Corey Seager and Marcus Semien.

When the trade deadline passed last Tuesday, the only deal Texas had made was sending reliever Matt Bush to playoff-contending Milwaukee in return for a minor league outfielder and a top pitching prospect.

Daniels said there were discussions with other teams, but with the reality of where they were in the standings, the Rangers didn't trade away any of their own prospects — and potential pieces for deals this winter — now for players that could be free agents at the end of the season. They also kept All-Star left-hander Martin Perez and reliever Matt Moore, both potential free agents that could be in line for contract extensions.

“That’s on me, that our team is in a better position that maybe we do give that extra prospect,” fourth-year manager Chris Woodward said.

With nearly two months left this season, Texas has time to look at some of its young talent such as former first-round picks Cole Ragans and Bubba Thompson making their big league debuts in the same game last week. Infielders Ezequiel Duran and Josh Smith, and pitcher Glenn Otto — all who came from the New York Yankees when Texas traded Joey Gallo last summer — have already been getting extended looks.

“It’s an important part of the next two months, and certainly nobody is going to be given the opportunity, it’s got to be earned,” general manager Chris Young said. “But there are some players that have put themselves in good position, and we’re looking forward to seeing those players."

There will be other evaluations as well, including the manager's job, while also trying to build momentum going into 2023.

“Where we are in the standings, that is not a reflection of like any one person or any one group. Ultimately, that’s really on the two of us more than anybody else,” Daniels said, referencing Young sitting next to him. “I think Woody and the staff are working tirelessly and doing everything they can do to to continue to develop this group and push forward.”

When the Rangers signed All-Star shortstop Seager and Gold Glove-winning second baseman Semien last December, along with right-hander Jon Gray on a $56 million four-year contract, they knew they still had a long way to go after 102 losses last year.

Gray was in his best stretch before a left oblique injury last week that could potentially sideline him the rest of this season.

Texas is on pace for a dozen more wins than last season, but 72 wins would still result in a sixth consecutive losing record. After a 2-9 start in April, the Rangers were 24-24 at the end of May — but they never got over the .500 mark.

After getting swept by Seattle in a four-game home series before the the All-Star break, the Rangers went 7-11 playing 18 consecutive days since then. Their longest road trip of the season began with a single game in Miami before a cross-country flight to 10 games against three AL West foes. They lost five of their seven games at home last week.

“We’ve got a lot of resources, we’ve had a lot of pieces coming in,” Woodward said. “It may be frustrating in the short term right now ... I want us to move the needle. And I know that we’ve got to play better, I’ve got to manage better. We’ve got to get over the hump with this group we have here.”