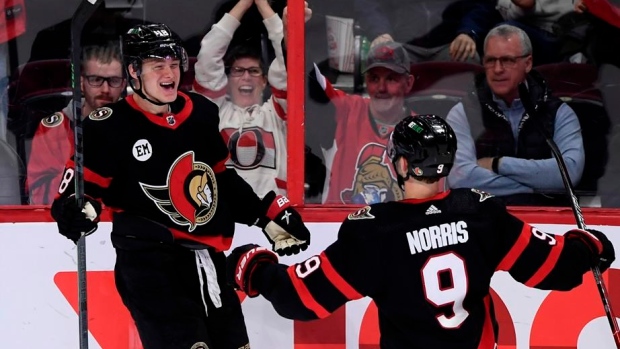 GANDER, N.L. — Tim Stutzle recorded a goal and two assists as the Ottawa Senators won their third consecutive game over the Montreal Canadiens 4-3 Thursday in pre-season action at the Steele Community Centre in Gander, N.L.

Drake Batherson opened the scoring just 38 seconds into the game, followed by a Brady Tkachuk goal under eight minutes later as Ottawa (4-3) took an early 2-0 lead.

In the second, Kirby Dach scored a power-play goal to even the game for the Canadiens 5:13 into the period. However, Stutzle responded six minutes later to put Ottawa up once again.

Claude Giroux added to the Senators' lead 8:02 into the final period. Josh Anderson scored for Montreal a minute later but that was all the Canadiens could muster.

Anton Forsberg stopped 20-of-23 shots he faced in the victory while his counterpart Cayden Primeau made 22 saves for Montreal.