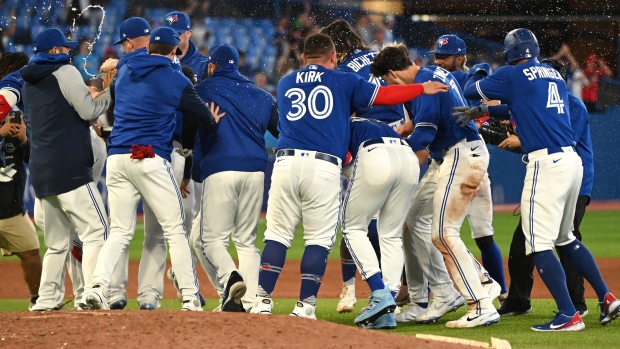 The Toronto Blue Jays have clinched the top wild-card seed in the American League and will play their first-round series at Rogers Centre starting Friday.

The Blue Jays locked up the spot Monday night when the Seattle Mariners dropped a 4-3 decision to the Detroit Tigers.

Toronto defeated the Baltimore Orioles 5-1 earlier in the evening in a rain-shortened game.

Major League Baseball changed the wild-card format for this post-season. Three wild-card teams will make the cut in each league this year along with the three division winners.

The Blue Jays, seeded fourth in the American League, will host the fifth-seeded team — either the Mariners or the Tampa Bay Rays — in a best-of-three series. All games will be played in Toronto.

The winner will advance to play the top-seeded Houston Astros in the best-of-five AL Division Series starting Oct. 11.

The sixth-seeded club will open against the No. 3 Cleveland Guardians on Friday in the other AL wild-card series. The winner will take on the No. 2 New York Yankees in the ALDS.

The division series winners will advance to the best-of-seven American League Championship Series. The winner of that series will play the National League champion in the World Series starting Oct. 28.

The Blue Jays last made the playoffs in 2020. Toronto was swept by the Rays in a wild-card series that year.

After winning the Fall Classic for the second time, the Blue Jays didn't return to the playoffs until 2015. Toronto reached the ALCS that year and returned to the final four in 2016.