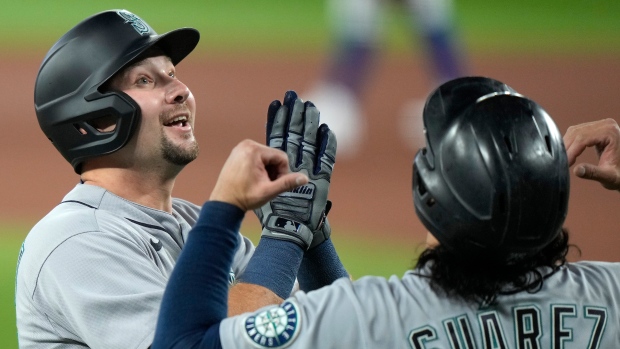 The Toronto Blue Jays are down 3-0 to the Seattle Mariners after three innings of Game 1 of their American League Wild Card series.

The Mariners got to Blue Jays starter Alek Manoah early, scoring all three runs in the first inning of the game.

Eugenio Suárez doubled home Julio Rodríguez, who was hit in the first plate appearance of the game, to open the scoring.

Catcher Cal Raleigh then blasted a two-run homer to increase the Mariners’ lead to three.

Alejandro Kirk, who started behind the plate for the Jays, picked up their first hit of the game off Luis Castillo in the second inning.  He was immediately erased on a Teoscar Hernández double play.

The Jays threatened in the third inning as both George Springer and Bo Bichette reached, but they were turned away by Castillo.

This is the Jays’ first home playoff game since the 2016 American League Championship Series against Cleveland.