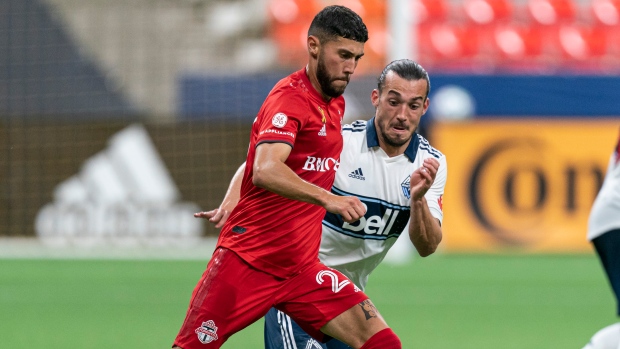 TORONTO — Midfielder Jonathan Osorio, who has missed Toronto FC's last four games, revealed Thursday he has been dealing with what he called a "neurological dysfunction" that dates back some two months.

The 30-year-old Osorio, a key component for both Toronto and Canada, says the problems started when he took an elbow to the head from Chicago Fire star Xherdan Shaqiri in a July 13 game. That blow to the left side of his head resulted in his jaw not being aligned properly and led to neurological issues.

"At first it seemed like a concussion. It was giving me concussion symptoms," he said.

The result was some days he felt fine, only to train and then feel poorly. Making matters worse, it took a while to diagnose the issue.

"I don't know how to say this in scientific ways," he said. "The best way I can explain it is I got hit on the left side and so now the right side of my brain was compensating for my left. My left (brain) wasn't working properly."

Osorio was cleared at halftime of the Chicago game and finished out the match, saying he didn't feel any symptoms at the time other than the impact of the hit itself.

"I thought OK, it's maybe just a contusion on my head. I've had that before."

He made the trip to Montreal three days later, only to be sidelined by what the club called concussion-like symptoms.

"It began as a pressure in my head and I was able to play a few games," he said.

Osorio started TFC's next seven outings, scoring four goals. But in the heat of an Aug. 20 game at Inter Miami, his third match in a week, he said the symptoms got worse including headaches that affected his vision.

"That's when I felt that maybe it was still a concussion injury," he said.

That was ruled out, however, after several medical consultations. Osorio has since started doing exercises designed to get the brain going again.

"It's slowly coming back and slowly helping the symptoms go away," said Osorio.

"In the end I think we've figured it out," he added. "I feel much better now. I'm able to train."

He is now using a mouthguard that helps his jaw re-align.

"I've never had this injury," he said. "That's why I didn't know how to go about it. I didn't know how serious it was. After Miami, I tried to come back twice. You guys saw me on the field. I tried. And the symptoms came back. Even worse."

Osorio has had medical problems in the past. In 2017, he had an irregular heartbeat and in 2019 suffered from anemia.

This time, he said the injury affected his mental health, with anxiety over what might be causing his distress.

"It was just hard. It was just hard to really figure out what it was. We couldn't figure it out," he said. "I start to feel good after some rest and then I come back to the field and as soon as we ramp it up, I start feeling horrible again. It was tough."

This setback comes at a key time for the veteran midfielder, with Canada set to play Qatar and Uruguay in friendlies in Europe later this month ahead of the World Cup in November.

"They are aware and they are working with me," he said of the national team.

Osorio says his progress has been day-to-day but is hopeful he can see some action Saturday in Orlando.

"I think I'm right there … knock on wood, let's see how tonight I react and tomorrow. And we'll see," he said, knocking his knuckles on the table in front of him.

He also hopes he will be able to attend the upcoming Canadian camp in Europe.

Osorio missed Canada's ill-fated camp in Vancouver in June, which was disrupted by a pay dispute, after an injury sustained in an earlier game against Chicago. At the time, coach Bob Bradley described it as "lower body discomfort.

Osorio, who is making US$1.026 million this year, is out of contract after this season. He says his focus has been on getting healthy and finishing the campaign. "And then after that, we'll see what's there."

The bell is about to toll on 13th-place Toronto (9-15-7), which goes into Saturday's game six places and seven points below the playoff line in the Eastern Conference. With just nine points available from TFC's three remaining games, playoff elimination seems imminent.

Toronto is winless in its last three games (0-2-1) and has conceded four goals in each of its last two outings. TFC had lost just one of seven matches (4-1-2) before that, a run that coincided with the arrival of Italians Lorenzo Insigne and Federico Bernardeschi.

All three Italians and Osorio were in the part of training open to media Thursday. Defender Chris Mavinga, who missed the weekend loss in Atlanta, worked out on his own.

"All good to go," Bradley said when asked about the Italians' availability.

Bradley said Mavinga (lower body Injury) was making progress but was not yet to take part in full training.

Defender Doneil Henry, who marked his 100th game with TFC in all competitions in Atlanta on the weekend, left practice early with some tightness on his lower leg.

Insigne also was absent in Atlanta, dealing with an unspecified "personal family situation." But he returned to training Wednesday.

Fifth-place Orlando (12-12-6) is one point above the playoff line in the East with four games remaining.

This report by The Canadian Press was first published Sept. 15, 2022.