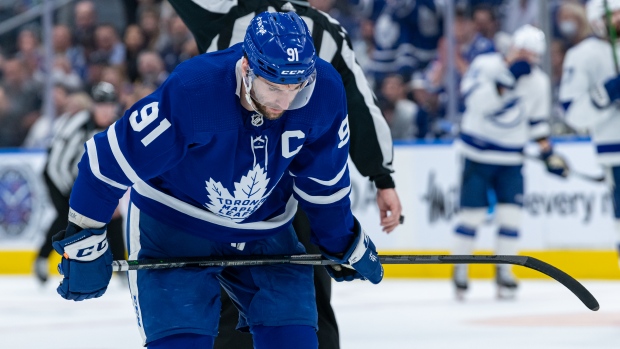 The Toronto Maple Leafs will be without the services of captain John Tavares for at least three weeks with an oblique strain, head coach Sheldon Keefe announced on Tuesday.

Tavares, 32, is headed into his fifth season with the team.

Sheldon Keefe says John Tavares has an oblique strain and is out a minimum of 3 weeks.

He appeared in 79 games last year, scoring 29 goals and adding 49 assists. The Mississauga, Ont. native has three years remaining on a seven-year, $77 million deal with the team.

Tavares played 17:14 in a 4-1 split-squad victory over the Ottawa Senators on Saturday afternoon, registering a shot on goal.

Its exhibition campaign continues on Wednesday with a visit from the Habs at Scotiabank Arena.

The Maple Leafs got some positive news as well on the injury front Tuesday as head coach Sheldon Keefe said defenceman Jake Muzzin is expected to return to practice on Wednesday.

Muzzin has been sidelined so far from group sessions at training camp by back discomfort. Keefe added, however, that Muzzin will not be a full participant in the session Wednesday.