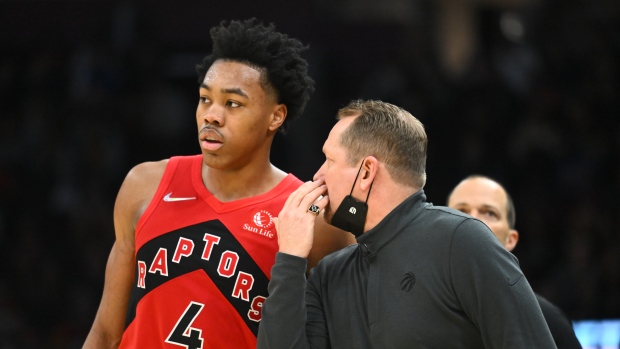 The Toronto Raptors look to pick up their second straight win to start the preseason when they clash with the Boston Celtics at TD Garden on Wednesday night.

You can watch all the action LIVE on TSN 1/4 and stream on TSN.ca or the TSN App.

The Raptors began their five-game preseason schedule with a 114-82 win over the Utah Jazz Sunday night at Rogers Place in Edmonton. Canadian Chris Boucher led the Raptors with 11 points and 10 rebounds.

The victory came with a price as point guard Malachi Flynn suffered a fractured left cheekbone late in the game. Flynn underwent a procedure to repair the injury, but should be ready for the start of the regular season.

Toronto finished the 2021-22 campaign with an impressive 48-34 record, good enough for fifth in the Eastern Conference. They'd go on to lose to the Philadelphia 76ers in the first-round in six games.

The Raptors open the season at home against the new-look Cleveland Cavaliers, featuring three-time All-Star Donovan Mitchell, on Oct. 19.