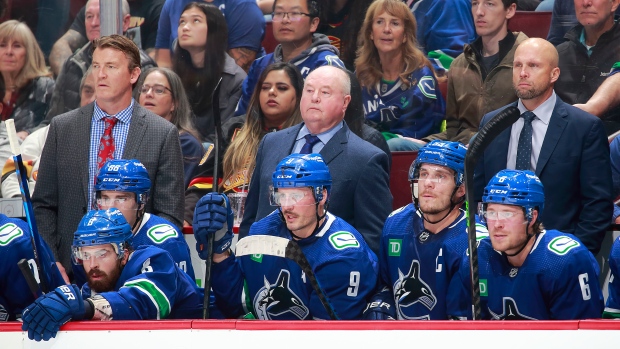 The Vancouver Canucks are 0-4-2 to start the season and are perhaps the NHL’s biggest early-season disappointment.

Once again, the Canucks can’t generate meaningful offence – a factor so constraining it’s already putting the team’s postseason hopes into question. I cannot imagine how frustrated the fan base is right now, because this story has been written so many times before.

The organization is already searching for answers. Head coach Bruce Boudreau remarked on Saturday he had grave concerns with the effort level his team is putting forward, this after a blowout loss courtesy the Buffalo Sabres.

If Vancouver can’t dig themselves out of this hole, we are going to veer quickly into talks about whether the team needs to pull the proverbial Band-Aid and start selling off assets, igniting a rebuild some have argued is long overdue. Others argue there is enough talent on the roster, and other components (front office, coaching, specific holes in the lineup) should be addressed first.
I circle back to the offence with the Canucks. It’s a paradox. Either we have greatly overstated the individual skill sets of forwards like Elias Pettersson, J.T. Miller, Brock Boeser, Bo Horvat, and Conor Garland, or there is something else impeding Vancouver’s core from regularly producing.

It is admittedly hard to stare at this lineup – the one the Canucks iced on Saturday night – and think they are too thin on scoring prowess (via DailyFaceoff): 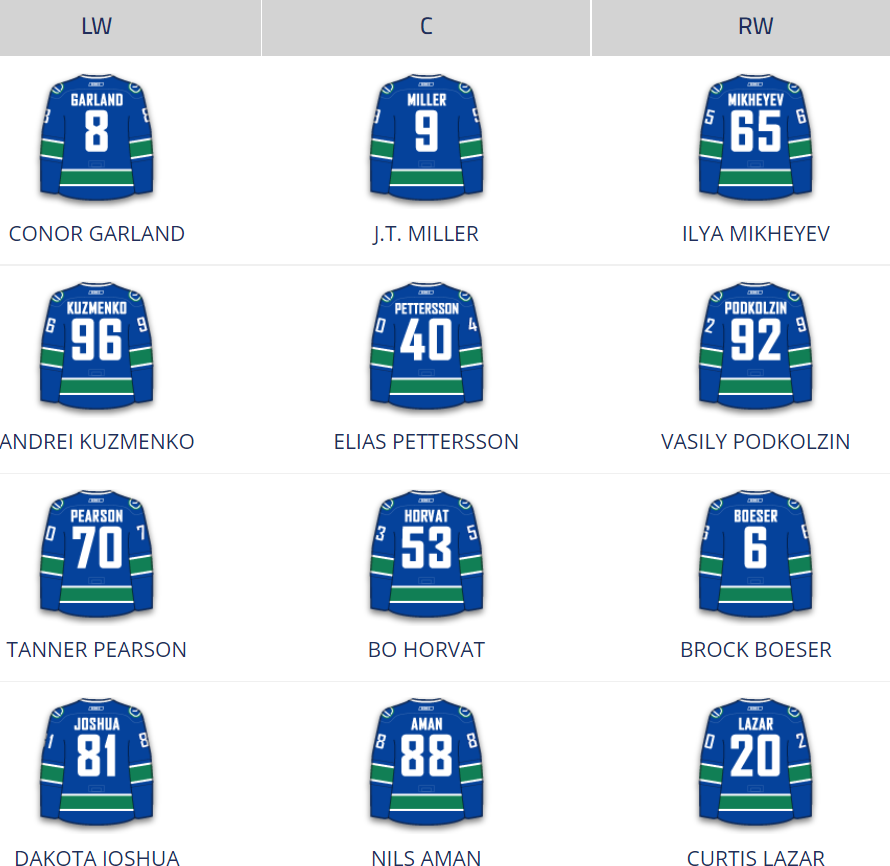 The fourth line leaves something to be desired, but there is plenty of playmaking and shooting ability inside of the top nine to qualify for the playoffs.

But set aside our qualitative opinions about the skill across this forward group. This, along with goalie Thatcher Demko, should be the core strength of this team. It’s certainly not the defence, which is a horror show – more on this in a moment.

Let’s look at Vancouver’s five-year offensive production at even strength. Despite this talent across the lineup, they haven’t cracked league averages once. In fact, they are as sure a bet as any to finish in the bottom third of the league offensively – certainly in the Pettersson (2018-present) era: 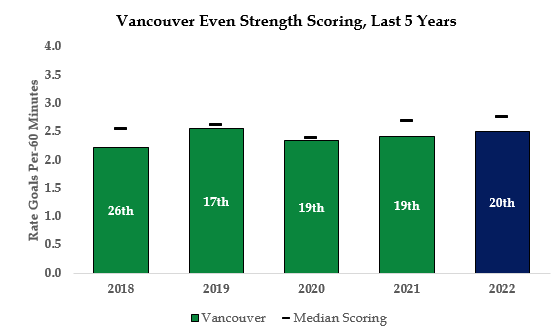 So, what’s going on here? Are we being unrealistic about the skill in the lineup, or is something else causing Vancouver to be about 8 per cent less effective than the league-average team at even strength – and as high as 11 per cent this season?

I think the defence, or lack thereof, is contributing to a lot of this. And how Vancouver’s front office chooses to attack this issue, considering how tight their salary cap situation currently is, feels nebulous to me. Because if you watch a Canucks game, the amount of difficulty this team has moving the puck out of the defensive zone is impossible to miss. It not only impedes any chance of a transition or counterattacking game, but it also sucks the forwards deeper into the defensive third, working harder to stave off goals against and sacrificing offensive opportunities as a result. Unless puck-moving sensation Quinn Hughes is on the ice (he’s currently day-to-day with an injury), it’s a grind.

Consider Vancouver’s four preeminent scorers, and how they produce with and without Hughes on the ice over the past three seasons. Quality of teammate can have an obvious impact on production, and across the league, first-line forwards playing with first-pair defenders are always the most productive; swap the first pair with the third pair, and you will see a performance drawdown.

But these performance drawdowns are staggering: 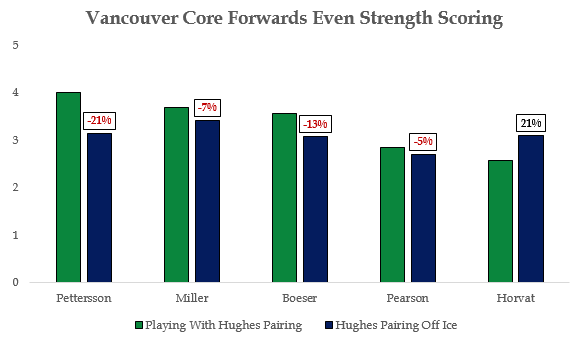 The Canucks have scored like one of the better teams in the NHL when the top units have been on the ice. The problem is as soon as the first-pairing defence comes off the ice, the offence immediately moves in reverse – players like Miller and Boeser see nearly 10 per cent less production, and Pettersson is as high as 20 per cent. (Curiously, Bo Horvat sees his numbers improve with Hughes away. I haven’t figured that one out yet!)

This, of course, also ignores the defensive component at play here. These forwards – when not playing with the first pairing – have less meaningful offensive zone time per shift, and because their shift lengths remain unchanged, we know they are spending more of their minutes cleaning up the defensive zone or working their way through the middle of the ice. That’s certainly a significant part of hockey, and these forwards aren’t just compensated to score goals. They are also paid to play reliable defensive hockey and, most prominently, drive favourable goal differentials for their team.

And that’s the rub. This Vancouver group has a hard enough time controlling play with their best units on the ice. Take away their top pairing, and it’s a war of attrition.

Oliver Ekman-Larsson, Tyler Myers, Kyle Burroughs, Luke Schenn (Hughes’ most common partner so far this season), Riley Stillman, Tucker Poolman, and the rest of the Canucks’ blueline depth chart have redeemable skills. But as a collection of talent in comparison to what other teams are dressing around the league, it’s deeply underwhelming. And sometimes a bad defensive group doesn’t just mean poor defensive play and big goals against totals.

In this case, Vancouver’s defensive problems are manifesting all over the ice.