Dubas on contract situation with Leafs: 'I won't let it be a distraction'

There is a fascinating dynamic emerging in Toronto, where general manager Kyle Dubas is entering lame-duck territory.

Speaking at Media Day on Wednesday, Dubas relayed a conversation he had with Maple Leafs president Brendan Shanahan during the summer. In short: Dubas would not be receiving an extension, with Shanahan opting to wait and see how the team progresses through a pivotal season.

In his fifth and potentially final season as general manager, Dubas has an awful lot on his plate. The pressure to deliver a team that can win in the postseason is extraordinary, owing to his team’s perpetual playoff flameouts. Last season’s early exit wasn’t the worst of the team’s playoff failures considering the opponent, but it marked the fifth consecutive first-round exit for the organization. It’s a blemish that won’t wash away without a serious Stanley Cup bid.

At first pass, it would seem difficult not to take the position of Shanahan when it comes to Dubas' future – at least for now. The goal for every NHL franchise is to build a contender and win a Stanley Cup. If you measure Dubas on this mandate, it’s clear the team has failed on the latter. Such is life when you haven’t won a single playoff series. And to Dubas' credit, he seems fine for now with the arrangement, telling Toronto media he was comfortable being judged at the end of this season.

On the other hand, this is a very tricky spot for a Toronto organization that isn’t far removed from years (and years) of abject futility. Dubas has had plenty of help, but it would be remiss to not acknowledge just how dynamic his team has been since he took over from predecessor Lou Lamoriello. If Dubas gets blame for what happens in April, he should also get credit for what happens during the rest of the season.

And what happens before April is compelling. Dubas’ teams have not only been dominant in the regular season, but they were also dominant in every regular season. Consider a four-year retrospective as to where Toronto stands relative to the rest of the league: 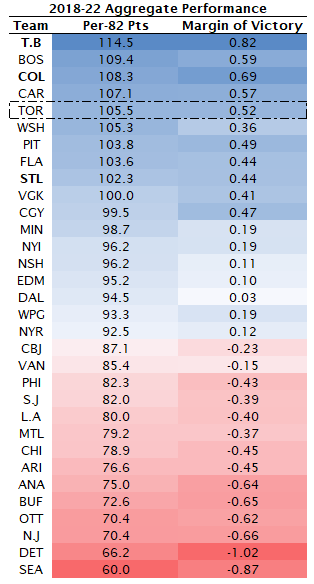 During Dubas’ tenure, Toronto’s the league’s fifth-best team by a measure of standings performance and total goal differential, which is a hallmark sign of a well-built lineup. Notably, Toronto is sandwiched by the three teams – Tampa Bay twice, Colorado, and St. Louis – who have won the Stanley Cup over this timespan.

Winning a Stanley Cup is awfully difficult, and you don’t have to ask the Maple Leafs how hard it is. Consider the Carolina Hurricanes, perhaps the most reputed organization outside of Tampa Bay and Colorado. They carry an impressive front office, one of the deepest lineups in the league, and have had nearly identical regular-season performance to that of Toronto. Carolina, unlike Toronto, has won a few playoff series. But what is that ultimately worth? Is getting swept in the 2018-19 Conference Finals more meaningful to front office job security than what’s happened in Toronto? (Carolina, for what it is worth, hasn’t won a game beyond the second round since the 2005-06 Stanley Cup.)

I mentioned earlier that Toronto shouldn’t be quick to discount how meaningful the team’s rally back to being a respected hockey franchise has been. Consider what Toronto has done since the 2007-08 season, with particular attention to Dubas’ teams versus his predecessors: 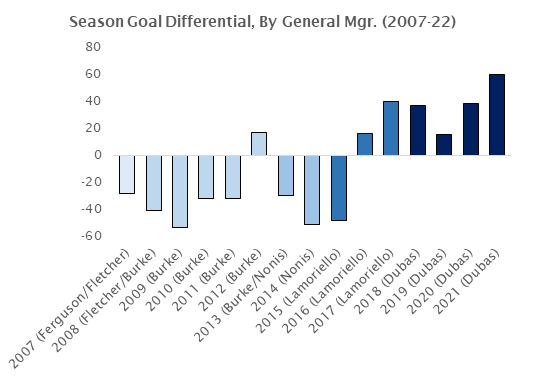 The Maple Leafs shouldn’t merely extend Dubas because he was the best general manager for the franchise in recent history – after all, low bars can be cleared easily. And Dubas needs to own some of the organizational failures under his tenure, which (along with the playoff losses) includes a daily tight-rope walk of the salary cap. Such aggressive spending, among other reasons, is why Toronto will be forced to dress what could be a disastrous goaltender tandem in a pivotal 2022-23 season.

There is a non-zero chance goaltending could sink this team this season, and if the season does head in that direction, it’s hard to imagine how Dubas gets an extension. Quite frankly, even another first-round playoff exit may do Dubas in for good.

But remember, this is equal parts Dubas, equal parts Dubas’ potential replacement. There are plenty of bright minds in the sport, perhaps now more than ever. Few have had as much success as Dubas has had, and merely terminating an employee is not alone a solution or a path forward.

The risk of further setbacks in a post-Dubas era is just as real as any. It’s a question Shanahan will be pondering all season long.