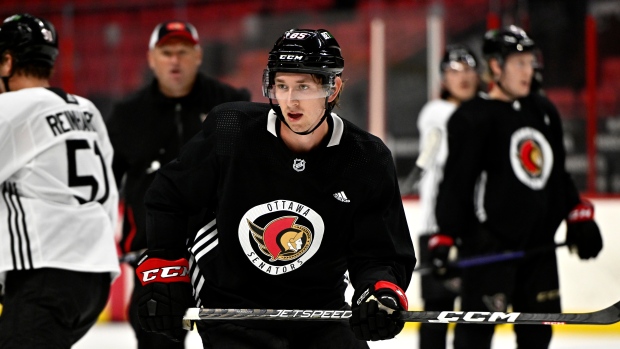 To some, the September equinox marks the transition from the summer to the fall. For excited hockey fans, this mile marker serves as a reminder that preseason hockey is about to begin, and the opening of the regular season is just a few weeks away.

This past weekend we were treated to some semblance of competitive hockey, with the Ottawa Senators and Toronto Maple Leafs getting together for two split-squad games. What made the action intriguing was the amount of NHL regulars dressed for both teams – a collection of some established veterans shaking off some summer rust, and up-and-coming players trying to crack NHL rosters.

There were a few impressive performances on both sides amidst Toronto’s 4-1 victory in the opening game, but my eyes were drawn most aggressively to a 20-year-old defenceman from the Ottawa Senators.

Jake Sanderson – the fifth-overall pick in the 2020 NHL Draft – spent the last two years with the University of North Dakota and entered training camp with a real shot at winning a starting job on Ottawa’s blueline. That’s equal parts his draft pedigree and how productive he was at the NCAA level, along with the reality that the talent across Ottawa’s NHL projected 23-man roster skews heavily towards the forward ranks.

It was just one preseason game, but Sanderson looked sublime. We saw flashes of both elite-level skating and puck distribution, the hallmarks of a top-four defender in the modern era of hockey. It’s precisely what Ottawa needs to see more of, knowing they’re without any sort of established pairing behind the duo anchored by veteran Thomas Chabot right now.

The hype with Sanderson will not abate anytime soon, nor should it. But it is an interesting dynamic to see a franchise – right, wrong, or otherwise – readying to make a big bet on such a young defender. This is not a league that’s particularly kind to young blueliners, and it made me wonder what the track record was for players of similar age and draft pedigree entering their first season.

If we look at players with similar profiles, we can get an idea for how they performed and what a first-year projection for Sanderson may look like. Some background information to start:

- Over the past 10 seasons, 25 skaters in their age-20 seasons established themselves as NHL regulars (1000+ TOI).
- Twenty-three of those 25 skaters came from the first two rounds of the draft, the exceptions including Montreal’s Victor Mete (2018-19) and Carolina’s Brett Pesce (2015-16).
- Eighteen of those 25 skaters were taken inside of the top 15 of overall selections; the players we will use as likely first-year comps for Sanderson

Let’s take a quick look at those 18-skaters and their respective production: 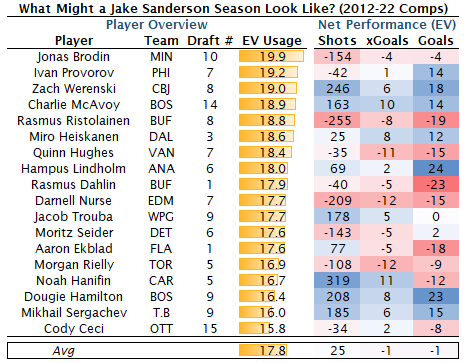 It takes an awful lot of player development – and trust, it should be acknowledged – for a 20-year-old defenceman to get heavy minutes, irrespective of where he was drafted. But because that bar has generally been quite high for teams in the past, you are left with a good number of success stories. Finding just 18 players with similar profiles to Sanderson over a playing decade is a statement in and of itself.

And there are success stories. Look at Boston’s Charlie McAvoy perhaps as the best example.

McAvoy is one of the best two-way defenders in the league and has been for some time. It’s also not lost on me that he was ushered into a Bruins organization that had been throttling opponents for years, with an impressive armament of talent. In his age- 20 season (McAvoy’s second as a pro, it should be noted), his most common forward teammates were Brad Marchand, Patrice Bergeron, and David Krejci. His most common partner? Future Hall of Famer Zdeno Chara.

That’s called being set up for success – injecting a great, young player into a sea of talent. And in his age-20 season, the McAvoy pairing crushed opponents, with Boston outscoring the competition 59-45 (+14) at even strength with him out there – a goal number also in line with the team’s expected goal numbers.

McAvoy isn’t the only player who prospered early on. Look at Anaheim’s Hampus Lindholm, Dallas’ Miro Heiskanen, and Columbus’ Zach Werenski as three other skaters who were able to dominate early and often. With hindsight, we know this is a collection of elite defenders, something that would differentiate them from the likes of then-Buffalo defender Rasmus Ristolainen, or then-Ottawa defender Cody Ceci. Ristolainen and Ceci are surely a cut or two below in the talent arena, but they also notably played on weak, rebuilding teams – a key distinction from the first group.

That brings us back to Sanderson. I have raved over what Ottawa’s done this off-season with respect to their forward group, and so long as Sanderson stays inside of the top four, there is a good chance he’s going to be skating with a trio of competent attackers on most every shift this season.

But unlike McAvoy and other top-end comps, Sanderson won’t have total insulation. Whether it’s Travis Hamonic or Nikita Zaitsev, Sanderson won’t have much help on his pairing. And Ottawa’s goaltending remains a big question mark. Will the team get another strong season from journeyman Anton Forsberg, or is regression inevitable there?

At any rate, Ottawa is making a couple of important bets here. The easier one is that Sanderson looks ready for NHL minutes right now. The harder one is that Sanderson won’t be dragged down by a lack of credible defensive partners, possible minutes with a weaker bottom-six forward group in Ottawa, and the broader reality that despite being on the upswing, this is still a team coming out of a rebuilding cycle.

But for one day, Ottawa’s freshest rookie was a blast to watch. And the Senators look like they have found themselves some much-needed help on the blueline.