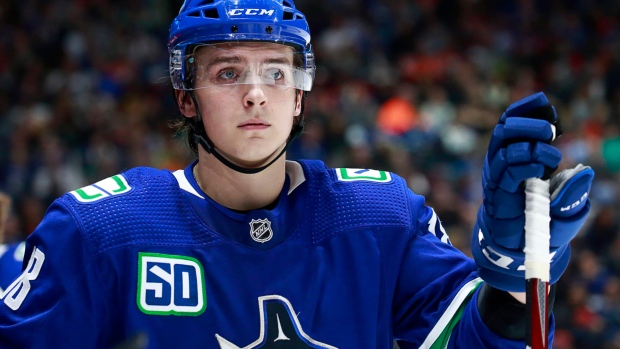 VANCOUVER — A woman who alleges she was sexually assaulted by Jake Virtanen says she told the former Vancouver Canucks forward that she did not want to have sex with him several times.

"I said no multiple times," the woman, whose identity is covered by a publication ban, testified in B.C. Supreme Court on Monday.

Virtanen, 25, was charged with one count of sexual assault in January following a police investigation into the alleged incident, which took place on Sept. 26, 2017. Virtanen was playing for the Canucks at the time.

Vancouver police launched their investigation in May 2021 after the 23-year-old woman filed a complaint.

Virtanen sat in the courtroom on Monday dressed in a blue suit and attentively listening to the Crown counsel's opening statement and the woman's testimony.

The judge and jury heard that the woman was 18 when she met Virtanen at the Calgary Stampede in July 2017. She said that she did not recognize him at the time and that she does not follow the Canucks.

While in Calgary, the woman and Virtanen kissed and exchanged numbers, then stayed in touch via text and direct messages on Instagram after they both returned to B.C.

In September 2017, the woman travelled to Vancouver to visit friends and take part in a photo shoot. She messaged Virtanen about seeing one another, and when he suggested meeting on the night she arrived, she offered to get together another day.

“I didn’t want to be put in a situation that made me uncomfortable," she said. “I was worried that late at night, I would be put in a sexual situation.”

Eventually, the woman agreed to meet Virtanen that night and he picked her up from a friend's house. The woman said they did not talk about what they would do and she thought they would go somewhere public.

When Virtanen took her to a hotel in downtown Vancouver, the woman said she "felt sick."

“I had this kind of sinking feeling in my stomach," she said. "It was the exact situation I didn’t want to be put in.”

The woman said she had no intention of having sex with Virtanen.

"If I wanted to have a sexual encounter, even if there was part of me that wanted to, I’d been travelling all day," she said. "I would have showered again. To be honest, I probably would have shaved my legs. And I didn’t do any of that because I was so certain and so set on it not happening.”

The woman said she trusted Virtanen, so she went up to his hotel room. She said he repeatedly kissed and touched her and she repeatedly pushed him off, telling him "I seriously don't want to have sex with you."

The woman testified that Virtanen sexually assaulted her.

She said she spent the night in the hotel room and in the morning, she asked him to drive her back to her friend's house. She said he told her he couldn't because he had to go to hockey practice and instead gave her money for a cab.

Crown counsel Alan Ip asked the woman how the situation made her feel.

The woman said she didn't go to police after the alleged assault.

"I just hadn't come to terms with the fact that I was raped," she said. "I was confused."

The trial is set to continue on Tuesday.

The Canucks placed Virtanen on leave in May 2021 and his contract was bought out the next month.

He last played for Spartak Moscow in the Russian-based KHL and is not in custody.

This report by The Canadian Press was first published July 18, 2022.