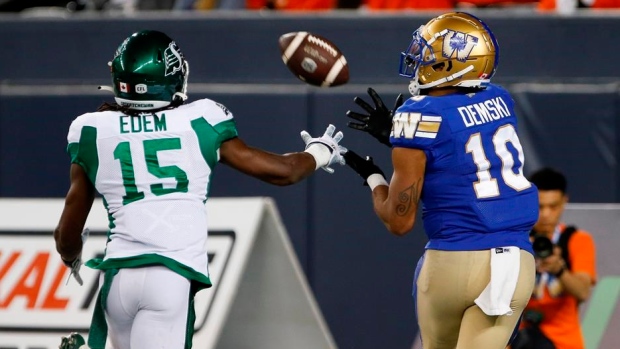 TORONTO — Defensive back Tyrice Beverette of the Montreal Alouettes as well as receiver Nic Demski and quarterback Zach Collaros, both of the Winnipeg Blue Bombers, were named the CFL's top performers Tuesday.

Beverette earned top honours, thanks in large part to his 100-yard interception return TD that earned Montreal a 25-17 road win over the Edmonton Elks. Beverette added five tackles and a pass knockdown in the game.

Demski had five receptions for 94 yards and two TDs in Winnipeg's 31-13 win over Saskatchewan. He also ran for 21 yards on three carries.

Collaros finished 14-of-25 passing for 296 yards and four TDs. Collaros leads the CFL in touchdown passes (32) and passing yards 3,874 yards — both career-highs.

This report by The Canadian Press was first published Oct. 4, 2022.