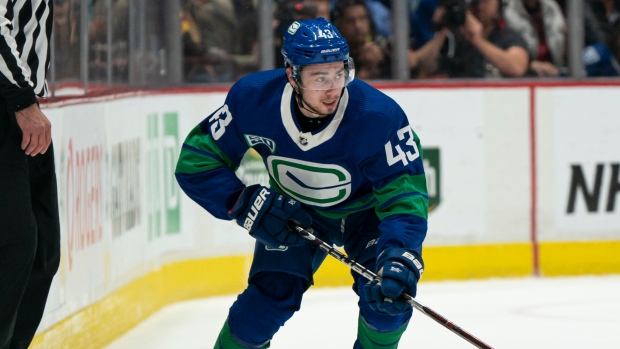 The star defenceman was a late scratch Saturday with a lower-body injury. He had played in all five of Vancouver's games to open the season, registering five assists.

Hughes is now week to seek. Boeser is day to day. #Canucks

Hughes had eight goals and 60 assists for 68 points in 76 games last season.

Boudreau also said that forward Brock Boeser is now considered day-to-day after taking a maintenance day at practice on Sunday. The 25-year-old has four assists in six games so far this season.

Prior to the announcement of Hughes and Boeser being sidelined, the Canucks said defenceman Tucker Poolman was placed on the injured reserve list. Poolman was injured on Oct. 15 during the Canucks' game against the Philadelphia Flyers. He was ruled out with an undisclosed injury after not returning to the bench for the start of the second period.

The 29-year-old missed most of the final three months of the 2021-22 season due to migraines. He played just four minutes in his return game in April and did not play again the remainder of the season. He recorded one goal and two assists in 40 games last season.

The Canucks (0-4-2) are winless on the season and will host the Carolina Hurricanes on Monday.