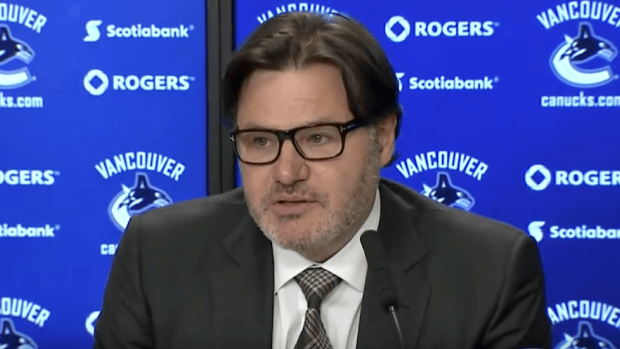 Aquilini has been accused of abuse by three of his adult children, a revelation made in a Vancouver courtroom on Tuesday by the lawyer of the 53-year-old Aqulini's ex-wife, Tali'ah Aquilini, who has applied to have the three continue to be declared children of the marriage for child support purposes.

Aquilini, who purchased his stake in the Canucks in 2004, has denied the allegations.

"We are aware of the allegations that have been made in the Family Court proceeding in Vancouver and have been in touch with Mr. Aquilini and his lawyers regarding same," the league's statement read. "Clearly, the parties have been involved in a most contentious divorce.  Mr. Aquilini has advised us that he categorically denies the allegations. We plan to continue to monitor the situation and, if necessary, will respond as we learn more as events unfold.”

All three of the children still reside with their mother and are currently pursuing higher education. Tali'ah Aquilini alleges child support payments ended in September of 2021.

“It’s really disappointing that I have to keep coming back to court in order to try to enforce Francesco’s obligation to pay child support for the children,” Tali'ah Aquilini told reporters outside the courtroom on Tuesday afternoon. “These are really amazing children. They are very intelligent, they are of good character, and they’ve worked hard in really vigorous programs.”

A statement of denial was released on Aqulini's behalf later on Tuesday.

“The couple were divorced and reached a settlement in 2013," the statement read. "Mr. Aquilini has met and will continue to meet any child support obligations required by the law, but he has concerns about the veracity of the information provided in support of financial demands. It is unfortunate that allegations without merit are brought forward for a collateral purpose. He will have nothing further to say at this time as the matter is before the courts.”

Aquilini was not present in the courtroom on Tuesday.