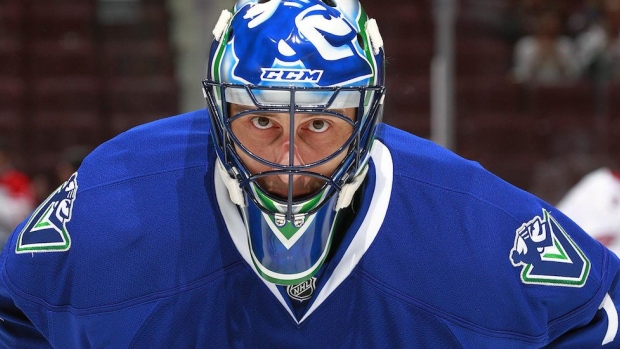 The Vancouver Canucks announced Wednesday that former goaltender Roberto Luongo will be inducted into the club's Ring of Honour next season.

Internationally, he backstopped Canada to gold at the 2010 Olympics in Vancouver and won a second gold at the Sochi Games in 2014. He is a two-time gold medallist at the World Championships (2003, 2004) and won the World Cup of Hockey in 2004.

Luongo is set to become the eighth player to be inducted into the Ring of Honour and only the second goaltender, joining Kirk McLean. The Canucks Ring of Honour currently includes McLean, Orland Kurtenbach, Thomas Gradin, Harold Snepsts, Pat Quinn, Mattias Ohlund, and Alex Burrows.

"We are proud to welcome Roberto to the prestigious list of Canucks Ring of Honour inductees," said Canucks president Jim Rutherford. "Roberto experienced many of his career highlights as a Vancouver Canuck and is deservingly viewed as one of the best goaltenders our game has ever seen thanks to those moments. He was a fierce competitor and a tremendous leader for this team, and we are honoured to be able to acknowledge his contributions to this organization and city."

"Roberto is one of the greatest Canucks of all time and we are thrilled to be able to officially congratulate him and celebrate all his accomplishments with this franchise," said Francesco Aquilini, chairman of Canucks Sports & Entertainment. "For eight years, he amazed and entertained us, brought us to our feet, and made us believe. He was a true professional who led by example, both on and off the ice, and we look forward to permanently recognizing him in the Ring of Honour alongside other Vancouver Canucks legends."