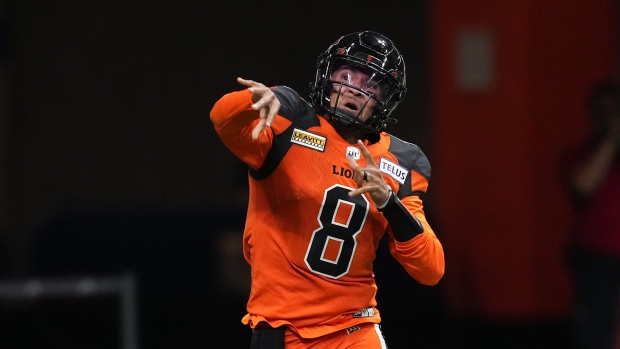 VANCOUVER — Vernon Adams Jr. has been waiting for this moment.

Almost exactly a month after joining the B.C. Lions in a trade from the Montreal Alouettes, the veteran quarterback threw his first touchdown pass in orange and black on Friday, propelling his team to a 34-19 victory over the ailing Ottawa Redblacks.

"Man, it was awesome," he said of the 13-yard toss to Keon Hatcher that opened the scoring early in the first quarter.

"They gave us what we expected and Hatch did a great job kind of shutting down his route — he had a corner route but the safety was over there or the halfback was over there and he kind of shut it down — and he was wide open and made a great catch.

"It's just a great feeling."

Friday was a great night for Adams, who threw for 305 yards and two touchdowns, completing 17-of-21 attempts despite being sacked five times. He added another 38 yards on the ground, including a 24-yard dash on the first scoring drive of the night.

“I thought he was a spark plug. I like that he used his legs some, too," said Lions head coach Rick Campbell.

"He's a good thrower and all that, too, but I think … what always frustrated me as a (defensive) coordinator was when you do everything right on defence and then the quarterback scrambles for a first down and keeps the drive going.”

Friday marked another rough outing for the Redblacks (3-11) who repeatedly found their way into the Lions' territory only to see their final attempts stymied.

Ottawa QB Nick Arbuckle threw for 363 yards, a touchdown and an interception as his team dropped its third straight outing. He connected on 27-of-36 attempts and was sacked once.

Kicker Lewis Ward was responsible for the majority of the Redblacks' points, making four-of-five field goal attempts, including a 47-yard kick.

Redblacks coach Paul LaPolice said the Lions controlled the game from the beginning.

"We felt we were moving the ball OK offensively and going down, but we didn't get to finish with sevens," he said. "But we’ve got to get them off the field too. We didn't do a good job of that.”

B.C. jumped out to an early lead and steadily accumulated points while holding Ottawa out of the end zone. The Redblacks finally broke through with less than two minutes on the game clock.

Arbuckle capped a nine-play scoring drive with a seven-yard toss to Tevaun Smith, who dashed two yards in for the major. A successful convert by Ward cut Ottawa's deficit to 34-19.

While the Redblacks managed just one TD, they put up 431 yards of offence — and that's something the Lions' defence needs to address moving forward, said defensive lineman David Menard.

“The important thing is we made the stops, right? But we gave (up) way too many yards," he said. "They ran the ball too much, they passed the ball at the end of the game way too much.

B.C.'s defence got its first interception in three games halfway through the final frame when Gary Peters picked off an Arbuckle pass intended for Smith. The Lions struggled to make use of the possession and ultimately punted.

The home side increased its advantage to 34-12 midway through the fourth when Antonio Pipkin ran in a quarterback sneak for his second TD of the night.

The third quarter ended with B.C. up 27-12 after the two sides exchanged field goals.

Ward made 47- and 20-yard attempts and Sean Whyte sent an 11-yard kick through the goalposts for the Lions.

The Lions lost a key piece early in the third when receiver Lucky Whitehead was taken down along the goal line and suffered an ankle injury. The speedster lay on the field for several minutes before being slowly helped off by a pair of trainers.

After receiving treatment, Whitehead briefly returned in the fourth before taking off his pads and sitting on the sidelines.

There were just seconds left in the first half when Adams sailed a 34-yard pass to Hatcher, putting B.C. in field goal position. Whyte made the 43-yard kick and the Lions went into the locker room up 24-6.

The final minutes of the second quarter appeared promising for the Redblacks, with the Lions taking a pair of careless penalties that gave the visitors a first down at the B.C. 31-yard line.

Arbuckle capitalized, firing a 19-yard pass to Justin Hardy before Ottawa took a 10-yard holding penalty. Ward capped the drive with a 22-yard field goal to make it 21-6.

Pipkin punched in the Lions' third TD of the night earlier in the quarter.

Adams started things off with a 26-yard bullet to Lucky Whitehead, then added a 35-yard throw to Dominique Rhymes that gave B.C. a first-and-goal. The Redblacks stopped the first attempt but on the second down, Pipkin went for a quick rush and stretched into the end zone for the major.

The Lions were already up 14-3 at the end of the first quarter.

With about two minutes to go, Adams found Rhymes along the sideline with a 40-yard pass, then followed it up with a short toss to Butler. The running back rushed 15 yards, the final few with Ottawa's Brandin Dandridge draped across his body as Butler stepped over the goal line.

The Lions celebrated by doing the worm.

B.C.'s defence struggled to contain Ottawa at times in the first and the Redblacks got a first down deep in Lions' territory midway through the quarter.

Some defensive pressure and an offensive procedural penalty prevented the visitors from entering the red zone, though. Lewis Ward instead kicked a 12-yard field goal to get Ottawa on the board and cut B.C.'s lead to 7-3 with about five minutes to go in the opening frame.

The Lions came into Friday's game smarting from a 25-11 loss to the Calgary Stampeders last week.

"We knew what we had to do," Adams said. "I don't like the way I finished (against Ottawa), but we'll get better. We’ll watch the film and better from it."

The Lions will be back in action on Oct. 8 when they visit the East Division-leading Toronto Argonauts. The Redblacks will take on the Alouettes in Montreal on Oct. 10.

NOTES: Despite the loss, Ottawa remains in playoff contention. The club still has two games to play against Montreal and if they win both and reach 7-11 on the season, they would hold the tiebreaker over the Alouettes … Players on both sides wore orange tape for Truth and Reconciliation Day. The Lions also wore an Indigenous-themed logo designed by Kwakwaka’wakw/Tlingit artist Corrine Hunt on their helmets.