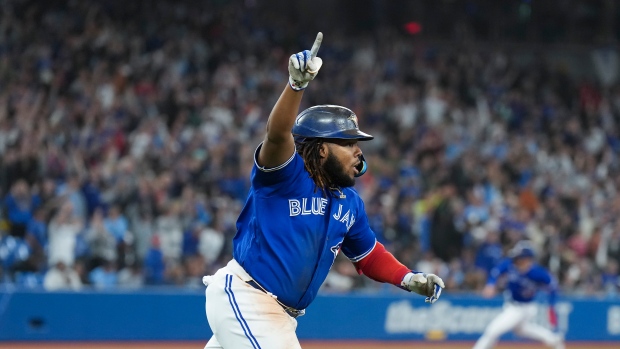 The Blue Jays (87-67) stopped the Yankees (94-59) seven-game win streak with a 3-2 victory in 10 innings, thanks to Vladimir Guerrero Jr.'s walk-off single to left to score Cavan Biggio from second base with two out.

"It was such a team effort tonight," said Schneider, adding he was pleased to see Guerrero earn his third career walk-off hit as Toronto won its third in a row.

"This was huge for him. He's been grinding a little bit, and hopefully, this catapults him down the stretch here."

In the top of the inning, Aaron Judge came to the plate with runners on first and second and two out.

Judge, of course, is one home run shy of the AL record of 61, set by Roger Maris 61 years ago.

Schneider brought in lefty reliever Tim Mayza not to face Judge but to intentionally walk the slugger to load the bases. Mayza then induced Anthony Rizzo to a ground ball to Guerrero at first to end the inning.

"With Judge coming up and knowing you got Mayza available with two outs to face Rizzo. We'd like that," Schneider said. "We had the top of the order coming up for us."

"You have to find a way to get it done," Guerrero said.

The win from the home side prevented the Yankees from clinching the American League East Division title.

"We know they need to win one more, but hopefully we can win all three (in Toronto)," Gausman said.

Gausman departed with one out in the seventh inning after striking out Harrison Bader. The Blue Jays' starter surrendered six hits, two runs with seven strikeouts and a walk.

After a shaky two innings to start the game, Gausman settled down after walking Judge to begin the third inning. He coaxed Rizzo to hit into a double play and then retired the next eight batters.

Judge singled, walked twice and struck out twice to remain at 60 home runs.

The Yankees snatched a 2-0 advantage with runs in the first and second innings. Judge led off with a single to right field, advanced to third on Rizzo's double and scored on Gleyber Torres's sacrifice fly to right.

Yankees' starter Luis Severino cruised through the first three innings without allowing a hit. But Bo Bichette greeted Severino with a sharp single to right field to lead off the fourth.

Guerrero followed up with an infield hit when Kiner-Falefa could not handle a hot shot. Alejandro Kirk was then issued his second walk to load the bases.

Hernandez missed a grand slam when his drive to straightaway centre field hit the top of the fence for a two-run double.

In the sixth inning, Rizzo and Torres knocked back-to-back, one-out singles. But Gausman ended the threat by striking out Josh Donaldson and Giancarlo Stanton.

Bichette continued his outstanding September, going 2-for-5. But he grounded out to the pitcher with two out and runners on first and second to end the seventh inning.

Jose Berrios (11-6) will make his team-leading 31st start for the Blue Jays in the second game of the three-game series against the Yankees' Jameson Taillon (13-5). Berrios has faced New York three times this season, all at Yankee Stadium, going 1-1 with a no-decision.

This report by The Canadian Press was first published Sept. 26, 2022.