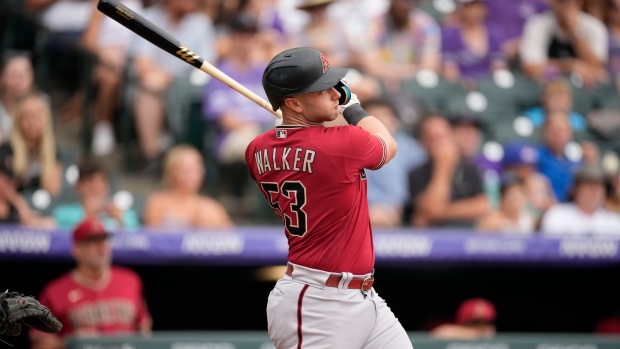 DENVER (AP) — Christian Walker had four hits, including a 460-foot homer, and drove in four runs, leading rookie Tommy Henry and the Arizona Diamondbacks over the Colorado Rockies 7-4 on Sunday.

Walker hit two doubles along with his 27th home run.

“I think if anything else, I can tone down my effort level because I don’t have to hit it 110 miles per hour for it to go out here,” he said.

Ian Kennedy finished for his eighth save. The Rockies had two on with one out in the ninth before Kennedy retired C.J. Cron on a lineout and struck out Elehuris Montero looking on a 3-2 count.

Even beyond Walker, the Diamondbacks had their way with Colorado starter Ryan Feltner (2-4). In 4 1/3 innings, the rookie gave up five earned runs and allowed three stolen bases, all of which happened with relative ease after Feltner had failed to check the runner on base.

Walker hit an RBI double off the wall in left-center field in the first. He launched a three-run homer in the third for a 4-0 lead.

Down 7-0, the Rockies scored three times in the sixth to end a 15-inning scoreless drought. Ryan McMahon, who had three hits, had an infield single to chase Henry.

Josh Rojas had two hits and two RBIs for Arizona. Against the Rockies this season, he is hitting .429 with eight doubles, two home runs and 12 RBIs.

Diamondbacks manager Torey Lovullo was back with the team and in the dugout after missing Arizona’s 6-0 victory Saturday night to attend the memorial service in Phoenix for Nicole Hazen, wife of Diamondbacks general manager Mike Hazen.

Two days after making his long-awaited major league debut, Rockies center fielder Wynton Bernard went hitless in four at-bats. He grounded into a forceout in the sixth inning for his first career RBI.

In a 5-3 victory Friday against the Diamondbacks, the 31-year-old Bernard had a hit and a stolen base, becoming the oldest player to do so in his major league debut since 1907.

Arizona designated hitter Ketel Marte left the game in the ninth inning after rounding second base on a double by Walker. Lovullo said Marte has tightness in his left hamstring and is day-to-day.

Diamondbacks right fielder Daulton Varsho left the game after being hit in the jaw with a ball that was thrown to him as he headed back to the dugout between innings. Lovullo said Varsho is day-to-day.

Diamondbacks: Continue their road trip with a four-game series against the Giants that begins Monday. Arizona has not yet announced what starting pitcher will face Alex Cobb (3-6, 4.15) on Monday.