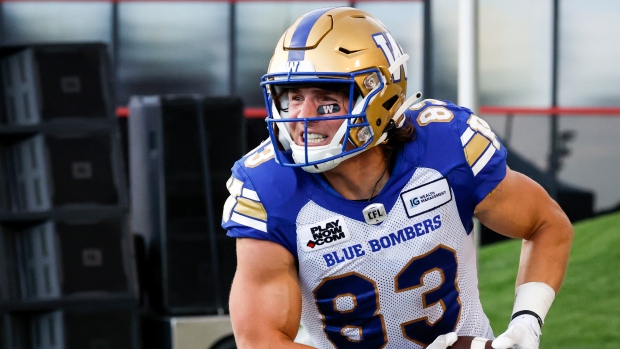 Winnipeg Blue Bombers general manager Kyle Walters says that, as of now, the team has not received any requests from NFL teams for players they want to invite to workouts, including standout rookie wide receiver Dalton Schoen according to TSN's John Lu.

#BlueBombers Kyle Walters says that as of now he has not received any requests from NFL teams for players they want to invite to workouts (in response to a question related to #CFL RoY Dalton Schoen).

Schoen, 26, was named the CFL's Most Outstanding Rookie for the 2022 season after catching 70 passes for 1,441 yards and 16 touchdowns in 18 games. He finished the season as the league's leader in receiving yards and touchdowns.

The Overland Park, Kansas native has previous experience with the NFL, having signed with the Los Angeles Chargers as an undrafted free agent in 2020 before spending time on the practice squads of the Washington Commanders and Kansas City Chiefs.

Schoen helped lead the Blue Bombers to a 15-3 record this past season and a third-consecutive Grey Cup appearance, where the team lost to the Toronto Argonauts.