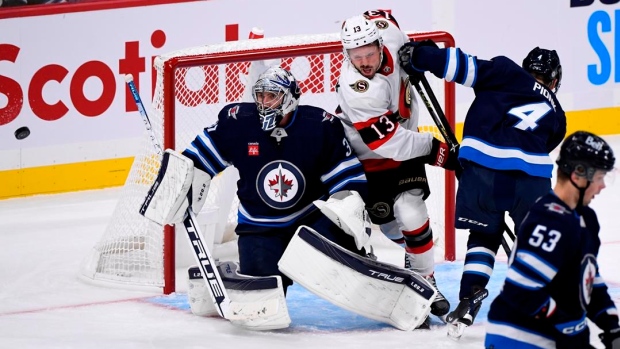 “I’ll never complain about a win, but listen, there’s a lot of work to be done here,” Bowness said. “I thought we started to skate better in the third … but no I’m not happy with it at all.

“For a lot of guys that was their first game, but that being said, we have to play a lot faster than that.”

Daniel Torgersson scored twice and Kyle Connor had a goal and two assists. Mikey Eyssimont and Ville Heinola also had goals for the Jets, who scored three times in the second period.

Bowness pointed to long shifts and turnovers by some veterans as trouble spots.

“I just see bad habits that I don’t like. And we’ve got to fix them,” Bowness said.

Tyler Motte and Shane Pinto each had a goal and an assist for the Senators. Cole Reinhardt also scored.

Goalie Mads Sogaard started for the Sens, stopping eight of the nine shots he faced before being replaced by Kevin Mandolese after playing 29:48. Mandolese stopped 11 of 15 shots.

Pinto, who missed most of last season with a shoulder injury that required surgery, is expected to centre Ottawa's third line with Motte and Mathieu Joseph.

“Tonight I felt really good, honestly,” he said. “My timing was there. Just the little things that I feel I need to get better with was there.”

The Senators iced a lineup without core players such as goalie Cam Talbot and forwards Brady Tkachuk and Tim Stutzle.

“I think Hellebuyck's clearly probably the difference here in the end. He made some really good saves there at the end,” Senators head coach D.J. Smith said. “But five-on-five, I liked our game.”

Ottawa had a power play with 2:04 left in the game, but couldn't beat Winnipeg's veteran netminder.

The Jets played most of their regular roster and featured a potential new top line. Mark Scheifele centred Connor and Nikolaj Ehlers. The three have never played on the same line together.

The game was tied 1-1 after the first period and Winnipeg led 4-3 after the second.

The Jets got on the scoreboard 22 seconds after they killed a penalty. Connor found Torgersson in the slot and the 20-year-old Swede sent a one-timer past Sogaard at 13:55 of the opening period.

“It was one of the better days in Winnipeg so far,” Torgersson said. “It was a good day, a good game, and I’m happy for the win.”

The Senators evened it up 40 seconds later when the Jets couldn't control the puck in their own end. Dylan Gambrell got the puck and passed it to Reinhardt, who sent a high shot past Hellebuyck at 14:35.

The second period opened with a faster pace and the Senators capitalized with some speed.

Pinto picked up the puck and raced with Motte down the ice on a two-on-one. Motte finished it off beating Hellebuyck on the blocker side at 7:40 for the 2-1 lead. Joseph had the second assist.

“Responsible players,” Smith said of the line. “They work, and they work for their turnovers. … They play well together.”

The Jets made it 2-2 at 13:44 when Eyssimont tipped a Connor shot past Mandolese 28 seconds into a power play.

Torgersson added his second of the night at 15:11, followed by Heinola's power-play goal at 19:10.

Pinto made it 4-3 when he scored with 24 seconds left in the middle frame.

Winnipeg regained a two-goal lead when a Connor shot bounced by Mandolese at 8:10 of the third.