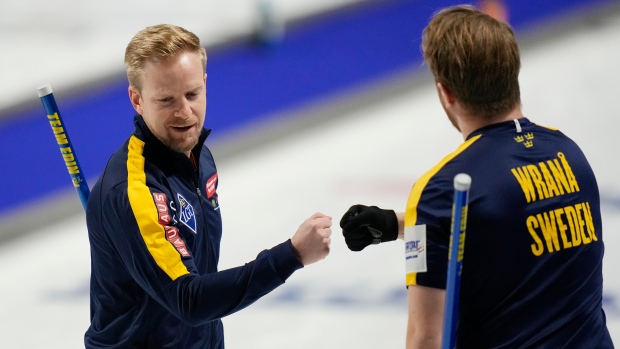 The reigning men's and women's curling champions - Niklas Edin of Sweden and Silvana Tirinzoni of Switzerland - won the Stu Sells Toronto Tankard on Sunday, the most notable event of a very busy weekend on the pebbled ice.

Team Edin, winners of the last four World Men's Curling Championships, won six straight games in the triple-knockout bonspiel after dropping their opener against Team Stuart Thompson of Halifax. They defeated the red-hot Team Yannick Schwaller of Switzerland in the semi-final.

Thanks to the organizers and the ice crew for an amazing event!

The most notable Canadian team was Jennifer Jones and her rink from Winnipeg. Fresh off their victory at the PointsBet Invitational, Team Jones went 2-3 in Toronto, missing the playoffs after an 8-1 loss to Team Delaney Strouse of the United States.

The Stu Sells Toronto Tankard marked the second win in the 2022-23 season for Team Tirinzoni after capturing the Summer Series in late August.

At the Prestige Hotels & Resorts Curling Classic in Vernon, B.C., Corryn Brown and her rink from Kamloops won the women's event after a 5-4 win over Japan's Team Ikue Kitazawa.

After two hard fought games today we came out on top at the Prestige Hotels & Resorts Curling Classic! Thanks to Team Kitazawa for a great final game. Thanks to the Vernon Curling Club and the hospitality and the great ice. (1/2) pic.twitter.com/LdxCQ3CIbc

On the Rock, 2022 Newfoundland and Labrador champs Team Nathan Young won the Rick Rowsell Classic in St. John's, Nfld., while Team Stacie Curtis did the same on the women's side.

🚨Rick Rowsell Classic Champions🚨
Thank you to the organizing committee for a wonderful event in memory of our dear friend Rick. ❤️
Thank you to all our sponsors for your support! ❤️🥌 #wedidit #champions #thankyousponsors pic.twitter.com/A6vJvr6dBc

At the Invitation Valleyfield in Quebec, Team Felix Asselin of Montreal edged former Brier champion Jean-Michel Menard and his team from Levis, Que., in the final, 4-3.

Team Wasylik capped off a great weekend with a 6-0 win over Team Chambers in the championship final. Congrats Team Wasylik 👏 pic.twitter.com/YRyawDOAiV

Finally in mixed doubles action, a pair of Canadian duos lost in the championship games of two separate tournaments.

Edmonton's Laura Walker and Kirk Muyres lost to Scotland Jennifer Dodds and Bruce Mouat in the Hardline Open final while Calgary's Jocelyn Peterman and Brett Gallant fell to Switzerland's Marlene Albrecht and Matt Wozniak in the final of the Qualico Mixed Doubles Classic.