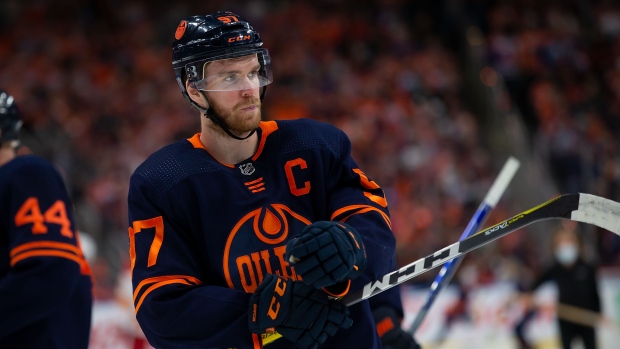 Our multi-series talent tiers feature continues this week, with a focus on the centre position. If you missed the opening week, we took a swing at grading the left wing and right wing positions.

The competition at the centre position league-wide is extraordinary. So much of the league’s talent plays down the middle of the ice right now, and so the bar to clear for this position is much higher relative to their wing counterparts.

A couple of housekeeping notes before we get started:

1. I am going to be generous to the Boston Bruins here and assume the team executes on their plan to bring back both Patrice Bergeron and David Krejci, neither of whom have current contracts.

2. Players with consequential, long-term injuries and on long-term injured reserve are excluded from the depth charts, as we expect significant time to be missed. Two big names (and their respective teams) impacted by this: Tampa Bay’s Anthony Cirelli, and Washington’s Nicklas Backstrom.

I don’t think much explanation needs to go into any of these three teams. Arizona and Columbus’ depth is utterly dire, a combination of journeymen skaters and young centres who haven’t shown much yet at the NHL level. It’s hard to envision a scenario, even in instances where both teams out-perform relative to expectations, where their centres are the ones driving the bus.

The Blackhawks are an interesting team in this scenario. It’s rather grim behind Jonathan Toews – the same Jonathan Toews that has been talked about as a likely trade candidate for a rebuilding Blackhawks organization. At his peak, Toews was perhaps the preeminent two-way centre, and as a trade option, his expiring contract ($10.5-million AAV) minimizes a buyer’s long-term risk. Which is a risk to consider. Toews turns 35 years old this season, and his numbers are on serious decline. Toews has just 30-goals in the past two seasons, and more concerning, teams are now scoring with high frequency against Toews’ line. Add it all up, and that’s how you end a season with opponents out-scoring the Toews’ line 57-45 at even-strength last year – a low-mark for his otherwise illustrious career.

Across three position groups and, effectively, fifteen tiers, this group seems the most volatile. There is an awful lot of upside within some of these teams, and there is also a stunning lack of redundancy across most of the lineups. So if that upside isn’t materialized, or injuries start coming into play, these groups can look weak relative to the rest of the league. A brief thought on all seven:

As usual, the mid-tier is generally comprised of lineups that are more top-heavy than their elite counterparts, or deeper lineups that don’t have the star power at the top.

Of the 10 teams, the one perhaps in the most precarious position are the Winnipeg Jets. Mark Scheifele and Pierre-Luc Dubois is a great 1-2 punch on paper, but reality may prove a bit different. For starters, it’s not entirely clear if Dubois is a part of this organization even in the short-term, with persistent trade clouds hanging over the 24-year old’s head. Dubois is a tremendously talented two-way attacker and, if traded, will command a significant haul of assets for the Jets. But a trade would likely put an unequitable burden on Mark Scheifele, and the returns from Scheifele over the last few seasons are mixed. He’s still producing offensively at a high-end rate, but both goals against per-60 (4.0) and expected goals against per-60 (3.6) were career highs, and not in a good way. In fact, last season was the first time in Scheifele’s career the Jets were out-scored at even-strength.

I think the Anaheim Ducks have breakout potential down the middle of the ice. Trevor Zegras’ rookie season was so strong he finished second in the Calder Trophy race, sandwiched between Detroit’s Mo Seider and Toronto’s Michael Bunting. Can the Ducks replicate Zegras’ success with an even younger Mason McTavish, who tore it up with the OHL’s Hamilton Bulldogs last season? If McTavish is the player the Ducks think they’re getting, this is a team with three very reliable centres and a possible upgrade candidate by the mid-year update.

Similarly, Ottawa is betting big that Shane Pinto – whose 2021-22 season was derailed by injury – has a big season behind Josh Norris and Tim Stutzle.

Two teams are worth discussing off the top here, and that’s the Boston Bruins and Tampa Bay Lightning.

I mentioned earlier I was being generous in assuming Boston will be able to navigate their cap challenges and bring back both Patrice Bergeron and David Krejci. With both in the fold, Boston has one of the best centre groups in the league. Even with just Bergeron (still one of the best two-way players in the league, even at the ripe age of 37!), I’d make a similar argument. But the fate of this position now lie in the hands of Don Sweeney.

Tampa Bay is a tier one, no-doubt-about-it team with Cirelli (who plays both at centre and the wing) in the fold. But he’s coming back from a significant surgery and there is a possibility a four-to-six month recovery could spill into 2023. Like Boston, this is still one of the deepest teams in the league at the position: Stamkos can play everywhere, Brayden Point is a bona fide superstar, and players like Pierre Edouard-Bellemare and Nick Paul can well hang against bottom-six competition around the league. Even with Cirelli’s absence I considered this team for tier one status; they’ll surely be upgraded back to tier one by the mid-year update.

If Tampa Bay is the logical promotion candidate, then the team at the most risk of falling back into tier 3 would be Minnesota. Joel Eriksson Ek is fantastic, but it was Ryan Hartman’s breakout season – he scored 34 goals in a single season after scoring 58 total since 2014-15! – that elevated this team. For now. Whether the scoring sustains itself or not, there’s little doubt Hartman’s two-way awareness has helped linemate Kirill Kaprizov do what he does best, and that’s attack.

What can you say about these three (four, if you count the aforementioned Lightning) teams? The talent down the lineups here is sickening if you’re a rival fan. Whether it’s the Connor McDavid/Leon Draisaitl tandem, the Auston Matthews/John Tavares pair in Toronto, or the three-headed monster in Florida, these groups are blisteringly effective and the primary reason why their teams have rocketed up the standings.

It is not worth spending any time on which group is the best. It’s clearly Edmonton’s. Not only would I take their top-six over any other tandem in the league, I think the Ryan McLeod and Derek Ryan tandem behind them is as good of depth as you could reasonably find with the first two guys commanding 25 per cent of the salary cap.

What’s more intriguing is who is second? Toronto has the next best 1-2 punch with Matthews and Tavares, but Florida’s Anton Lundell was a breakout year one player, with 44 points in his first 65-games. It’ll be curious to watch how his usage and that of Sam Bennett’s fluctuates over the course of the year; Bennett also had a career year in Florida, but breakout offensive seasons after a player hits the 400-game mark in his career are quite rare, and tend to regress back to a player’s average over time. And then there’s Tampa Bay, who will be right back in tier one when Cirelli returns.

If you made me pick, I think I’d order them as follows: Edmonton-Toronto- Florida, with a healthy Tampa Bay on par with the likes of Toronto. But I’d love to hear how you grade this mini-group out, because there is an absurd amount of talent across these depth charts.

That’s it for our centres. Up next, defencemen!