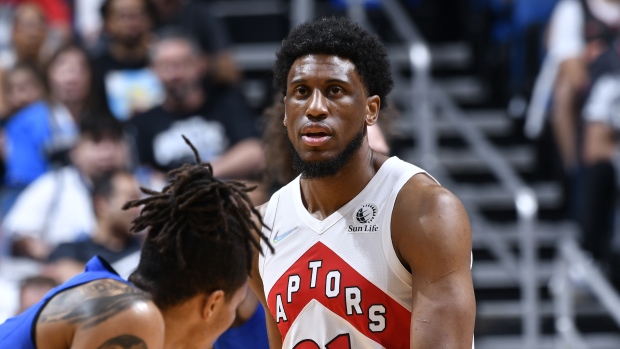 VICTORIA – When Otto Porter Jr. was weighing his options in free agency and mulling over an offer from the Raptors this past summer, one of his first calls was to his good friend and former Chicago Bulls teammate Thaddeus Young.

Porter already had a pretty thorough scouting report on the city – his wife is from Toronto, after all – but what about the team and the organization? Young, who came over at last February’s trade deadline, was happy to vouch for them.

“He’s definitely one of my better friends in the league,” Young said. “He reached out to me and asked me all of the questions that needed to be asked and I told him to come on through. Just come on through, sign the deal and let’s go. We’ll be ready to rock and roll.”

“It was a small factor [in my decision],” Porter admitted.

After playing together for parts of two seasons in Chicago from 2019 to 2021, the veteran forwards have been reunited with the Raptors. Fresh off winning a championship as a key member of the Golden State Warriors, Porter agreed to a two-year, $12.4 million deal with Toronto in early July. Young, also a free agent, had re-signed with the club a week before.

His decision was an easy one. While the details of his new contract needed to be worked out, the 34-year-old knew where he wanted to be.

“In my mind, it was always to try to get back here,” Young said following his team’s morning session on the first day of training camp in Victoria, B.C. “Even when I spoke to [general manager] Bobby [Webster] and [president and vice chairman] Masai [Ujiri] on the phone when the trade was actually going down, the first thing they said was, look, we don’t want this to just be a one year thing, we want this to be something that lasts beyond this year, and I was completely fine with that.”

Acquired from San Antonio for the expiring contract of Goran Dragic and a first-round pick, Young appeared in 26 regular season games for the Raptors and, despite sustaining a thumb injury early in their first-round series with Philadelphia, he performed well in the playoffs.

Last year was a whirlwind for Young, who only played sparingly with the Spurs and had to relocate his family to a new country mid-season. Naturally, it took him some time to find his rhythm and get comfortable in his new surroundings, but once he did, he fit right in. It didn’t take long for him to make his veteran presence felt on one of the league’s youngest teams. Now that he’s had a full off-season to get settled and is with his new team from Day 1, he’s excited about what he can bring, and so are they.

“To me, he’s almost like a new addition this year as well,” head coach Nick Nurse said of Young. “We know who he is, what he can bring and we like him a lot, and he likes us, but it’s almost like having another new guy because he’s totally in a new position than he was a year ago, starting [the season] with us now.”

“[It feels] 10-times different,” said Young. “I’m coming into training camp and coming into the season with a fresh mind, mentally prepared and focused. Last year when I got here, like, I was fine but that’s because I’m a tough individual. But I was mentally burned out, just for the simple fact that I didn’t play the first half of the season and I spent a lot of time conditioning myself and burning myself out trying to be ready for the second half of the season. And then I think when I got here I wasn’t able to really play to my full potential and my full reach. So now I get a fresh mind, a fresh start.”

Together, Young and Porter come with 24 years of NBA experience, more than Toronto’s five starters combined. After just one day of camp and a few summer workouts, Porter says the young guys are already picking his brain, the same way many of them would lean on Young and his wisdom late last season.

For a growing team looking to take that next step, having a pair of good vets around – both on the court, where they’ll play important roles with the second unit, and in the locker room – should be invaluable.

“It’s always super helpful,” Nurse said. “Their experience, their wisdom, their composure, advice, all of the things that they can do because of their experience… I think it was needed for our roster.”

“We have a bunch of young guys that are hungry and ready to do whatever it takes,” said Porter, who averaged 8.2 points in 63 games – most of them off the bench – for the Warriors last season, en route to winning the title. “They want to get to that elite level and it’s our job to pass on information that I got from Golden State or from my previous years playing. I definitely want to share that with the younger generation.”

“He’s a great person, extremely professional and he knows how to play basketball,” Young said of Porter. “He knows how to be in the right spot, he knows how to teach guys and guys respect his voice. That's the one of the biggest things, you bring in a guy that guys are gonna respect and it just makes the team so much better.”

The Raptors are also hoping they can bring something else that last season’s team was lacking: depth. Toronto ranked last in the NBA in bench scoring a year ago and there were stretches where Nurse could barely find seven reliable rotation players.

That’s the unfortunate reality of banking on an inexperienced second unit. It takes time for young players to develop, earn the trust of the coaches and become consistent contributors in this league. As a result, the starters were overworked and, eventually, got worn down.

Young helped solidify Toronto’s bench late in the season, as did the emergence of Chris Boucher and Precious Achiuwa. Those three return to back up the likely starters – Fred VanVleet, Pascal Siakam, Scottie Barnes, O.G. Anunoby and Gary Trent Jr. With the additions of Porter, EuroBasket gold medallist Juancho Hernangomez, and second-round pick Christian Koloko, this looks like a deeper club.

That could go a long way in determining how this team fares. It’s a long season. To preserve the starters – particularly VanVleet and Siakam, who carried massive workloads last season, with the former breaking down in the second half – and withstand injuries, Nurse will need more than a few good options off his bench. Even the young guys at the back end of the roster will need to take a step forward.

Will one of the backup point guards – Dalano Banton, who was among the best players on the floor Tuesday, according to Nurse, and Malachi Flynn – separate themselves in camp and earn regular minutes behind VanVleet? How healthy is Khem Birch after underdoing off-season knee surgery? Can sophomore Justin Champagnie – a Nurse favourite, who’s in camp on a partially guaranteed deal – make the roster and crack the rotation?

“We’re super deep,” Young said. “We have a lot of young guys that can play basketball, some guys on training camp deals and those guys can play as well. So, it’s just about finding the right combination, the right guys who can play in the right roles and fill the right spots, and just going out there continuously helping with the growth of the guys on the tea