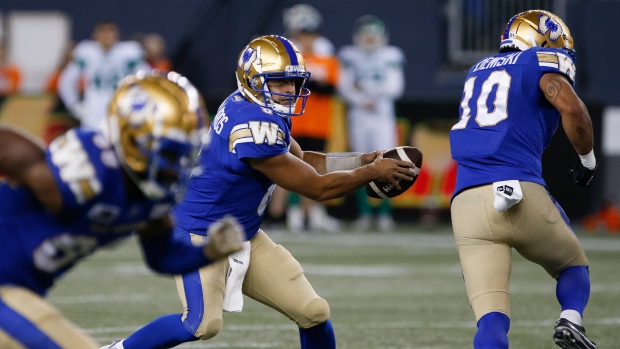 Winnipeg Blue Bombers teammates Zach Collaros and Nic Demski were honoured alongside Calgary Stampeders linebacker Jameer Turman as they all were named the Canadian Football League's top performers for September on Wednesday.

These guys were 🔥 when the Fall weather started to hit in September!

A native of Steubenville, Ohio, Collaros leads the league in passing yards (3,874) and passing touchdowns (32).

Collaros' teammate Demski was frequently on the receiving end of his passes in September as Demski reeled in 21 catches for 280 yards and six touchdowns. The 28-year-old Winnipeg, Man., native has a total of 346 yards from scrimmage in four games and has totaled eight second-down conversions.

Demski was previously named a top performer in Week 17. Demski has a total of 52 receptions for 613 yards and nine touchdowns in the 2022 campaign.

Thurman, 27, earned his first honour of the season and rounds out the list as the only non-Blue Bomber to earn the honour for September.

In a five-game stretch, Thurman racked up 26 tackles three tackles for a loss and an interception.

Thurman has totaled 60 tackles on the season along with a career-high three interceptions.