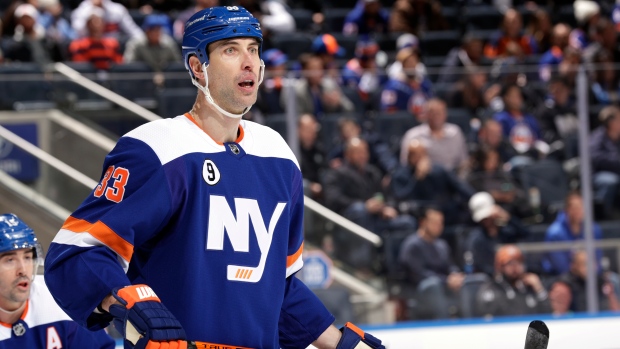 If Zdeno Chara is to return for a 25th NHL season, it appears it will not be with the New York Islanders.

Islanders general manager Lou Lamoriello said Monday his team is not currently considering re-signing either Chara or fellow veteran Andy Greene after both held roles on the blueline last season.

Lou Lamoriello said Zdeno Chara and Andy Greene are not currently considerations for defense roles for next season's #Isles teams. No discussions with them.

The 45-year-old Chara scored two goals and had 14 points in 72 games with Islanders last season while playing on a one-year, $750,000 contract.

A third-round pick (56th overall) by the Islanders at the 1996 NHL Draft, Chara spent four years on Long Island before being acquired by the Ottawa Senators in a package that included the 2001 second-overall pick (Jason Spezza). He played for Ottawa for four seasons before signing as a free agent with the Boston Bruins in 2006. Chara spent 14 seasons in Boston, captaining the team to a Stanley Cup in 2011. A six-time NHL All-Star, he won the Norris Trophy in 2009.

The Trencin, Slovakia native has 209 goals and 680 points in 1,680 career NHL games split between the Islanders, Senators, Bruins and Washington Capitals. He has 18 goals and 70 points in 200 playoff games.

Greene, 39, posted two goals and 10 points in 69 games last season, his third with the Islanders.

A veteran of 16 NHL seasons, Greene has 52 goals and 264 points in 1,057 career games with the Islanders and New Jersey Devils. He served a captain of the Devils for five seasons from 2015-2020 before being traded to the Islanders.

The Islanders, who signed restricted free agents Noah Dobson, Alexander Romanov and Kieffer Bellows on Monday, currently have $3.48 million in cap space (per CapFriendly) with six defencemen under contract.