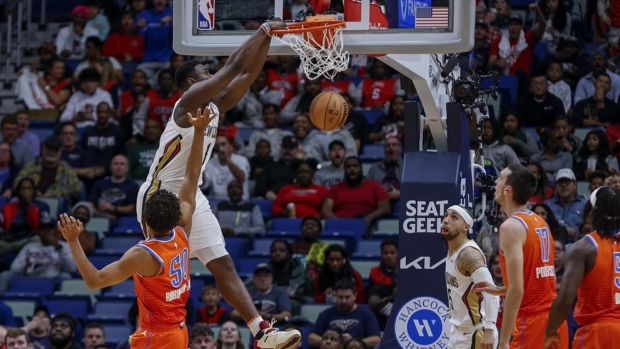 With the Pelicans playing without Brandon Ingram and C.J. McCollum, Williamson also had eight rebounds and three blocked shots against a collapsing defense aimed at turning him into a passer.

“I thought he handled it well,” Pelicans coach Willie Green said. “You can see by his assist numbers. There were moments he knew he could get to the basket with his speed, but he trusted his teammates. We’re all super proud of him.”

Williamson either scored or assisted on every point in an 11-4 New Orleans run in the third quarter that stretched the Pelicans’ lead to 75-62.

“I always try to play basketball the right way,” Williamson said. “I imagine if there are three people on me, two people got to be open. They made the shots.”

The Pelicans slowed down Shai Gilgeous-Alexander from the floor, but the penetrating guard still scored 31 points on 7-of-21 shooting. He did most of his damage from the foul line, going 16 of 18. New Orleans took 20 foul shots overall.

The Pelicans led 93-86 with 5:34 left, but the Thunder got back-to-back 3-pointers from Aleksej Pokusevski and Gilgeous-Alexander to cut the deficit to 95-92. Oklahoma City took a 101-100 lead on Jeremiah Robinson-Earl’s 3-pointer with 51 seconds left, but New Orleans scored the final five points.

Williamson got a three-point play on hard drive and a free throw, and Herb Jones drew a charge against Gilgeous-Alexander with 2.3 seconds left.

Williamson credited Jones’ defense with the victory. After taking the charge, Jones inbounded the ball with 1.5 seconds left off the back of Pokusevski, grabbed it and was fouled. He made both free throws.

“Herb and I got this thing: We look at each other and say ‘Ain’t nothing sweet over here,’” Williamson said. “Herb is a special defender. For him to get a charge and hit two free throws is big time.”

“It might have been legal, might not have been," he said. "I trust that they got it right.”

Williamson also matched his career high with three blocks and had one steal. He looked spry on defense and energetic running the floor.

“He was great,” Green said. “He’s still knocking some rust off. He’s getting better and better more he plays. Zion’s individual defense is part of our collective defense as a team. We can live with guys making shots as long as we make it tough.”

This was Williamson’s 100th game as a pro, and his injury-plagued journey was on his mind.

“It’s been a long journey, but would I have liked it to look like that? Absolutely not. I would’ve liked to have played every game," Williamson said. "But at the end of the day, it’s helped me mentally and spiritually and growing as a man.”

Pelicans: Besides Ingram (left great toe) and McCollum (health and safety protocols), the Pelicans were without F Larry Nance Jr. (right shoulder) and F Naji Marshall. … The Pelicans have won six of eight. … Australian Dyson Daniels squared off against fellow Aussie Giddey for the first time in their NBA careers. The childhood friends both played at the NBA Global Academy in Canberra. … Williamson picked up the first technical foul of his career in the first half.

Pelicans: Host Toronto Raptors on Wednesday in a stretch of six of seven at home.