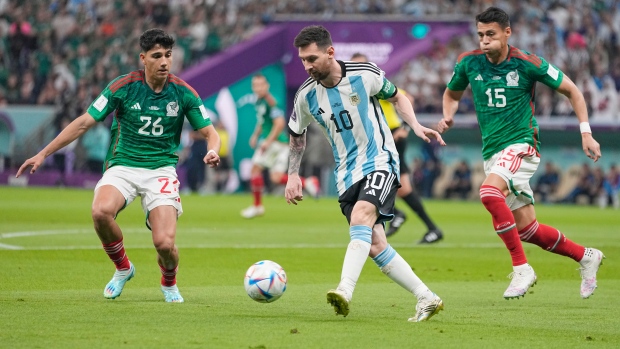 Lionel Messi and his Argentina side are scoreless with Mexico after the opening half of play in their Group C matchup at the 2022 FIFA World Cup in Qatar.

Neither team has had many great chances to score with Mexico having the lone shot on net and leading Argentina in total shots 3-1. However, Argentina has held possession for 65 per cent of the game while Mexico sits at 35 per cent.

Each team has been given a yellow card, Néstor Araujo for Mexico and Gonzalo Montiel for Argentina. Mexico has been more aggressive with their play, recording 10 fouls to Argentina's six.

Argentina and Mexico are both desperate for victories after going winless in their opening matches. Argentina were upset by Saudi Arabia, 2-1, while Mexico battled Poland to a scoreless draw. A loss by Argentina would eliminate them from the knockout stage in what could be the 35-year-old Messi's last World Cup of his career.