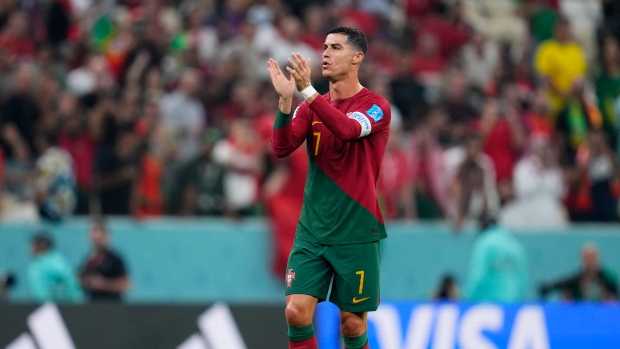 Portugal star Cristiano Ronaldo tweeted a message of togetherness prior to the country's quarter-final match against Morocco at the 2022 FIFA World Cup on Saturday.

"A group too close to be broken by outside forces. A nation too brave to let itself be frightened by any adversary. A team in the truest sense of the word, which will fight for the dream until the end! Believe with us! Strength, Portugal!"

Ronaldo, 37, was dropped from the starting lineup prior to Portugal's Round of 16 victory over Switzerland a day after Portugal coach Fernando Santos expressed frustration about his captain's attitude during the team's final group stage match against Korea Republic.

“Cristiano is right,” he told reporters on Thursday. “The group is united and the news from outside is not going to interfere,” he said. “We’re focused on playing for Portugal — and winning.”

Ronaldo's tweet comes after reports that he had threatened to leave the national team prior to the end of the World Cup. However, the Portugese FA has refuted these claims.

The official statement from the Portugese Football Association.

Ronaldo opened the World Cup with a goal against Ghana to become the first male player to score in five different World Cups. But ineffective performances against Uruguay and Korea led to him being pulled midway through the game against Korea, leading to questions about his role on squad.

“I didn’t like it, not at all. I really didn’t like it,” Santos said of Ronaldo’s poor attitude at being taken out of the game against South Korea. “We fixed that in-house and that’s it."

Ronaldo has scored 118 international goals, a record in men's tournaments. However, he has never scored in the knockout round at the World Cup.