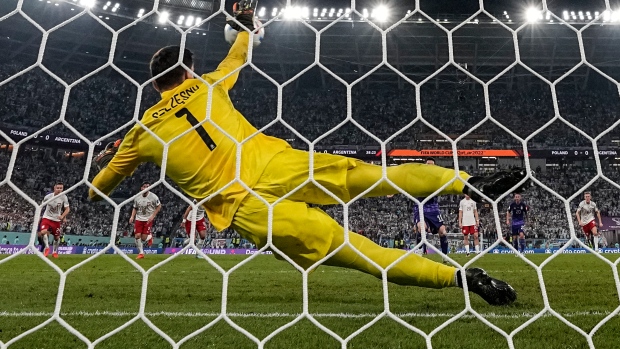 Poland withstood sustained pressure from  Argentina and the two teams are scoreless at the half of their Group C finale at the 2022 FIFA World Cup in Qatar.

Wojciech Szczesny was called into action on a number of occasions and stopped a late Lionel Messi penalty to preserve the draw.

In search of a ninth World Cup goal, Argentina's talisman Messi was lively in the early going.

The Paris Saint-Germain man had his first shot on target in the seventh, but his low drive was easily handled by Szczesny. He came back again in the 10th, moving away from Matty Cash to create room for himself and shot for the near post, but Szcsesny was there to parry away for a corner.

Messi played provider in the 16th, finding Marcos Acuńa inside the box. The Sevilla defender struck his effort well, but it was deflected out for a corner.

Argentina came close breaking the deadlock in the 28th. Angel Di Maria found Julian Alvarez in the area. His shot was deflected by Cash, but it fell to Acuńa whose hard shot just cleared the far post.

Alvarez continued to menace the Poland back line. Collecting a pass from Nicolas Otamendi, he came into the are in the 36th and shot low, forcing Szczesny into a fine save. Grabbing his own rebound, he crossed for Messi at the far post, but he headed over before Szczesny made contact with Messi. After a VAR check, Argentina was awarded a penalty.

Messi's penalty was well struck, but Szczesny was up for it and dove to parry it away. It was Szczesny's second penalty save of the World Cup, having previously stopped one against Saudi Arabia.

A draw would be enough for Poland to advance to the knockout round.