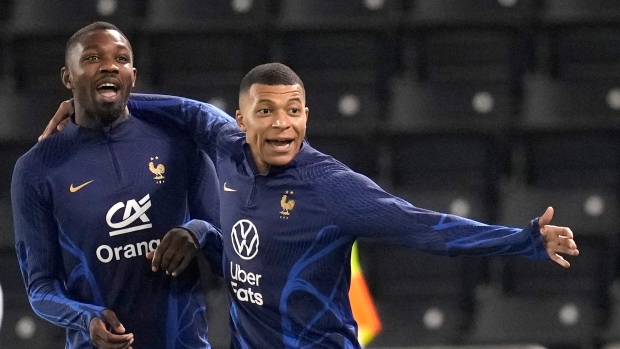 DOHA, Qatar (AP) — France is looking to become the first country to successfully defend its World Cup title in 60 years and Didier Deschamps the first coach to guide his team to back-to-back championships since 1938.

Do they have what it takes against Argentina?

Over his decade in charge, Deschamps has proven to be smart and pragmatic and open to tactical changes as the match demands.

At his disposal he has a talented and cohesive squad led by forward Kylian Mbappé, the star of France's World Cup triumph in Russia four years ago.

Here are some keys to repeating that feat at Lusail Stadium on Sunday.

Mbappé's speed, strength and shooting accuracy are proven threats and have him on track at 23 to one day become the all-time leading scorer at the World Cup. He already has added five goals in Qatar to the four he scored in Russia in 2018.

One of the defining breakout images of Mbappé at that tournament in Russia was the foot race that earned France a penalty against Argentina in the round of 16.

His blistering pace should put Argentina's defense to the test, but he's not the only threat. Center forward Olivier Giroud has overtaken Thierry Henry to become the leading scorer for the French national team. Giroud has scored four goals so far in Qatar.

In the semifinals, Morocco exposed how to exploit France’s left wing and Mbappé’s relative lack of protection for his defense. Argentina has a quick, attack-minded wing back in Nahuel Molina who — if he plays in a similar role to Achraf Hakimi for Morocco — can help target France left back Theo Hernández.

Deschamps reacted on Wednesday by taking off Giroud, sending Mbappé into the middle, and using substitute Marcus Thuram on the left to both attack and protect Hernández. It also eased the burden on the hard-working France midfield led by Antoine Griezmann.

Thuram and Mbappé then combined to create the goal for Randal Kolo Muani in the 2-0 victory over Morocco.

Only once in the past 11 finals has the team that scored first failed to win the trophy. That was France in 2006.

It sounds so simple and it has worked for this generation of Les Bleus in World Cup knockout games.

France has scored first in each of the seven games it played from the round of 16 onward at the past two World Cups.

Croatia, conversely, never scored first in seven games in the same period, and eventually lost to France in the 2018 final and to Argentina in the semifinals on Tuesday.

In fact, only Argentina has led France in those seven games — for a brief period in their epic match in Kazan four years ago.

For nine minutes in the second half, France trailed 2-1 until right back Benjamin Pavard’s slicing shot — picked as goal of the tournament — equalized. France won that game 4-3 after Mbappé also scored twice.

Under Deschamps, France takes the lead and quickly tightens the defense. His team seems never to panic at having to soak up pressure, like in the second half against both England and Morocco.

France had 36% possession in the 2-1 win over England in the quarterfinals and only 34% in the semifinals, according to FIFA statistics.

That 34% figure was the same in the semifinals for Argentina, which was happy to cede the ball to Croatia, then hit hard and fast when space opened.

Argentina has not trailed in Qatar since its opening 2-1 loss to Saudi Arabia.

Illness is running through the France squad, as it did to Switzerland earlier in Qatar.

The three center backs France rely on — Raphaël Varane, Ibrahima Konaté and Dayot Upamecano — all have been affected this week.

Upamecano seems closest to full recovery and Varane’s status is perhaps the biggest concern as the senior partner to his less experienced teammates.

Konaté was superb against Morocco dealing with the 22 crosses into the penalty area France had to defend.

Argentina, with forwards Lionel Messi and Julián Álvarez leading the attack, prefer to run hard at the opposition defense or cross the ball with low passes into danger areas. France's defense will need clear heads and fast feet.

Against Morocco, goalkeeper Hugo Lloris often sent the ball long, evading the pressing forwards and asking less of his defenders.