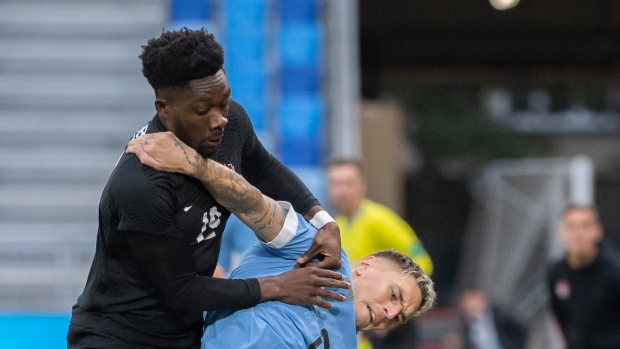 Uruguay is currently ranked 13th in the world by FIFA, sandwiched in between Canada's CONCACAF foes Mexico at 12 and the United States at 14. The CanMNT is No. 43 in the world according to the latest rankings as of Aug. 25.

La Celeste, one of only four teams to advance from the group stage in the last three straight World Cups, will have their hands full in Qatar's Group H that also features Portugal, Ghana and South Korea.

The friendly will mark only the second time that Uruguay and Canada have ever met. At the 1986 Miami Cup, Uruguay was a 3-1 winner over Canada. George Pakos scored the lone Canada goal.

He pleaded his case to the ref, but Koné goes into the book for barging into fellow substitute Diego Rossi.

Once again, Canada is finding space down the flanks and enjoying possession, but can't get that final ball right and Rochet hasn't been tested.

Nicolas de la Cruz, scorer of a first-half golazo, is subbed off for Roma's Matias Vina.

After a hard challenge from Manuel Ugarte, Stephen Eustaquio is slow to get up. There was no foul on the play as the Sporting man took down his rival from Porto.

Some untidy play from La Celeste has resulted in a number of waves of Canadian attack, but still nothing to show for it.

A free kick from Eustaquio is met by Kamal Miller, but the CF Montreal defender's free header just clears the bar.

After some more good work from Davies, Jonathan David turns and fires from inside the area to force a fine diving save from Rochet.

Mathias Olivera picks up a yellow for an elbow into Alphonso Davies' back.

A fine ball from Giorgian de Arrascaeta is intercepted by Steven Vitoria before Darwin Nunez can bag another. It would be the final action of the day for Nunez, who's been subbed off.

It's a straight swap of CF Montreal midfielders as Samuel Piette makes way for Ismaël Koné.

51' - Nothing on a Eustaquio corner

Stephen Eustaquio whips an enticing header across the face of goal, but nobody can latch on to it as it travels out over the touchline.

Napoli defender Mathias Olivera goes down after some contact from Samuel Piette. He appears to be fine and a free kick is awarded.

Junior Hoilett is on for Richie Layrea.

Uruguay is full value for their 2-0 win at the half. The lead has allowed them to collapse a little and cede possession to Canada, but La Celeste has kept the CanMNT at bay.

Canada looks the most likely to score in the half's closing minutes, but the CanMNT can't get that final ball right.

Canada with some fluidity moving forward with Davies central to it. A Jonathan Davies effort is blocked just inside the area.

In perhaps Canada's best chance of the half, a Cyle Larin effort is blocked by Sebastian Caceres before it could make it to Rochet after some fine work from Davies.

Alphonso Davies' curling free kick into the area can't find anybody and is cleared easily.

Making up for his miss only minutes earlier, Liverpool striker Darwin Nunez makes it 2-0 with a powerful free header.

After some fine work from Agustin Cannobio and Luis Suarez, Nunez misfires from close range when he should have done much better.

Catching Borjan napping, De La Cruz launches one from distance as the Red Star Belgrade man scrambles back to his line. The ball harmlessly travels over the bar.

A left-footed blast from Jonathan David from just outside the area is easily handled by Rochet.

Another back pass to Borjan is juggled by the 'keeper and almost allows for a Uruguay tap-in.

Uruguay seems content to let Canada maintain possession in midfield, not allow the CanMNT to venture much deeper or trouble Sergio Rochet.

Uruguay has taken an early lead on an absolutely beautiful goal from Nicolas de la Cruz.

6' | Uruguay get an early opener from a free kick.

The River Plate midfielder beat Milan Borjan with a curling free kick to make it 1-0.

1' | We are underway from Slovakia!

The match in Slovakia is underway.

A star-studded XI for Uruguay

The big guns will be out for Uruguay on Tuesday afternoon.

Canada's XI is in

John Herdman has released his starting XI to take on Uruguay with two changes from the Canada team that defeated Qatar 2-0 last week.

Nottingham Forest's Richie Laryea, on loan at Toronto FC, is handed a start along with Scott Kennedy of 2. Bundesliga side Jahn Regensburg. They step in for Reading winger David "Junior" Hoilett and Chaves defender Steven Vitória.

UPDATE: John Herdman says there is an error in the original lineup graphic and Vitória will start ahead of Kennedy after all.