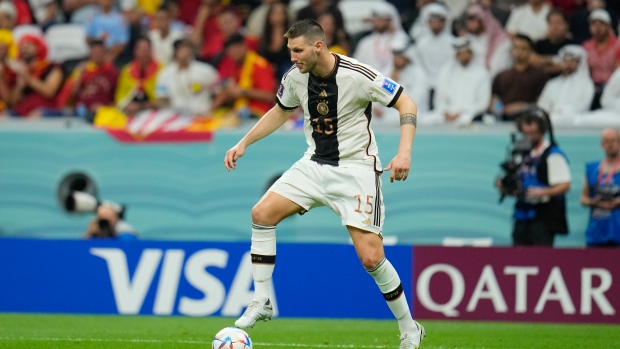 DOHA, Qatar (AP) — After getting a favor from Costa Rica, Germany needs a win against the Central American team on Thursday to have any chance of reaching the knockout stages at the World Cup.

Costa Rica’s surprise win over Japan on Sunday ensured Germany did not face the prospect of immediate elimination with a loss to Spain later that day. With the pressure off, Germany fought back from a goal down and drew 1-1 thanks to Niclas Füllkrug’s late equalizer to postpone its fate to its final game in Group E.

Germany will advance to the round of 16 with a win if Spain also beats Japan in the other group game. Costa Rica controls its fate and will advance with a win.

“We didn’t come to sit around and take pictures of Qatar,” Costa Rica coach Luis Fernando Suárez said before the tournament.

Even a draw would be enough for Costa Rica to reach the knockout stages if Spain beats Japan in the group's other game being played at the same time.

Spain leads Group E with four points after two games, followed by Japan and Costa Rica both on three, while Germany has just one.

“We have a lot of humility,” said Germany midfielder Thomas Müller, who pointed to the team’s position in the table. “There isn’t much reason to be really euphoric.”

Müller said Germany’s late draw against Spain provided a morale boost for the team, as well as the chance to get to the knockout stages and “show the football world what we’re really made of.”

Germany was in a similar situation at the last World Cup in Russia, where Joachim Löw’s team lost its opening game 1-0 to Mexico before beating Sweden 2-1. A win against South Korea in the final group game would have ensured the defending champions progressed, but it slipped to a 2-0 loss and crashed out.

“Now we have to do it differently,” Müller said. “When the football world looks at Germany vs. Costa Rica, I think we’re the favorite for those looking from the outside. It’s clear we have to win. Naturally we have respect.”

If Japan wins or draws it could go down to goal difference between Germany and Japan or Spain, depending on the result.

Costa Rica will go through with a win, while a draw will be enough if Japan loses.

“Costa Rica has shown two faces at this World Cup,” Füllkrug said. “The game against Spain is difficult to evaluate. Then they made a nuisance of themselves in the second game against Japan. They had better positional play and let the ball run. We’re prepared for them playing like they did against Japan.”