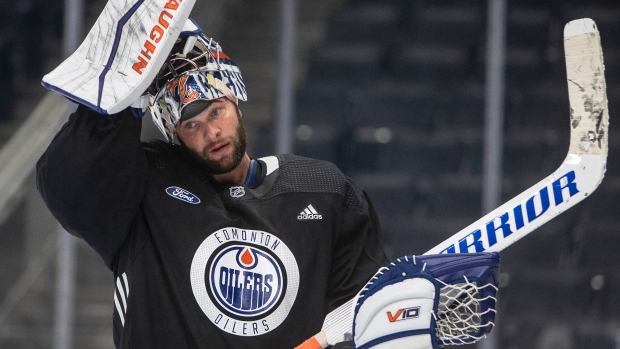 Jack Campbell in Edmonton. Darcy Kuemper in Washington. Ville Husso in Detroit. Alexandar Georgiev in Colorado. And lest we forget, whatever Toronto and Vegas are doing between the pipes.

This off-season saw a significant goaltending shuffle around the league, but it wasn’t always easy. The movement away from workhorses – a result owing in equal parts to the nearly impossible search for an elite goaltender and the higher confidence in platoon setups, where two capable goaltenders afford rest opportunities to one another as the season progresses – created the setup for a squeeze in the goaltending market. Add a flat salary cap due to limited hockey-related revenue growth, and you have the recipe for a wild off-season at the position.

Different markets have different expectations for their new goaltending faces, but several will be counted on to deliver this season. Pressure is quite high in Edmonton for Campbell, where the team feels on the precipice of a breakthrough in the Western Conference. Similarly high expectations will be placed on Kuemper in Washington after he snagged an increasingly rare long-term deal.

Historically we do not see a significant volume of goaltending movement, though it’s become a bit more common with the increase in platoons. That movement is quite valuable to those who study and analyze the position, especially from a data perspective.

Goaltenders are uniquely impacted by the defensive structure and systems in front of them, and measures like raw save percentage tend to say more about the overall defensive performance of the team than the goaltender.

More recently, we have utilized measures like goals saved above expectations, where we measure a goaltender’s production by adjusting for shot volume and the quality of shots faced. If nothing else, it allows us to make more apples-to-apples comparisons between goalies in different playing environments.

Out of curiosity in relation to Campbell, Kuemper, and the rest of the goalies trading places this summer, I wanted to look at established starters over the years who earned a starting spot with a different team the following season.

Did performance follow, or was performance volatile and unpredictable, even with regular starters? 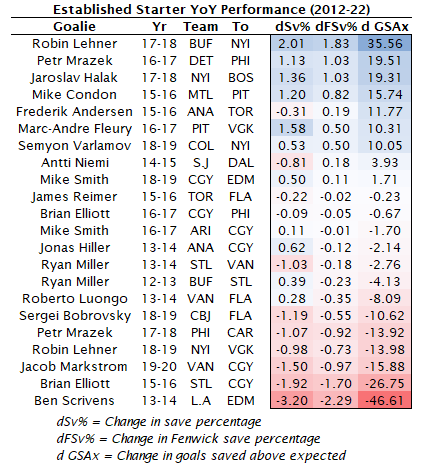 The short answer is our goaltenders were all over the map. We shouldn’t discount that some front offices and scouting departments have a better handle on the position than others, but across this group, picking a winner in advance would have been extraordinarily difficult.

You can place these goaltenders into three groups – those who outperformed, those whose performance was stable year-over-year, and those who underperformed.

In the outperformance group, few goaltenders had stronger opening years than Robin Lehner when he moved to Long Island, stopping 93.0 per cent of shots and saving an estimated 19 goals from the Islanders’ goals-against ledger. The talent within this group can range from a starter like Lehner to journeymen like Petr Mrazek, and future Hall of Famers like Marc-Andre Fleury.

Notably, that same wide talent disparity exists in the underperformance group. Florida’s Sergei Bobrovsky was the surest goaltending bet in some time, until he wasn’t. Bobrovsky’s first year out of the Columbus market saw him stop just 90.0 per cent of shots for the Panthers, conceding 14 goals more than expected over a 50-game season.

Also in that group is Calgary’s Jacob Markstrom, whose first year transition outside of Vancouver saw sharp drawdowns in performance. Amusingly, Markstrom would also go on to post a career-best season in his second year in Calgary, this time backstopping a more talented team with head coach Darryl Sutter in tow.

The lesson? Goaltenders still make or break teams in the NHL. But our confidence in which goaltenders will do the making, and which will do the breaking, is probably significantly overstated. Single-season volatility can be quite high, even for goalies with lengthy track records like the ones above.

This lack of security at the position is yet another reason why teams are moving towards platoon options, hedging downside risk through redundancy at the position. And as I’ve said in the past, it’s not a trend I see changing anytime soon.