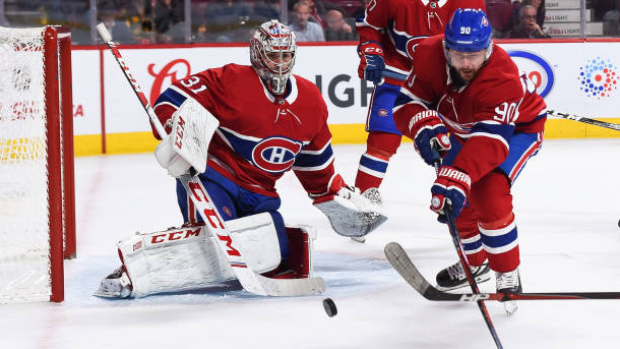 Here is a number that might surprise you: across the entire National Hockey League, only two goaltenders have played in 75 per cent or more of their team’s games during the 2019-20 season. That list includes Winnipeg’s Connor Hellebuyck – the presumptive Vezina Trophy favourite after another Herculean season – and Montreal’s Carey Price.

It has been a quiet evolution, but teams continue to shy away from workhorse goaltenders, and that trend furthered itself this season. It’s not for the lack of investment – NHL teams committed $240 million to goaltenders playing at least one game this season, or just under $8-million per team.

So, what has changed? We looked at this a year ago and the prevailing theories were relatively straightforward: teams are more cognizant about the value of rest (or, to borrow from the National Basketball Association, “load management”) for starting goaltenders, and are certainly more aware about the adverse role fatigue and workload can play when it comes to injuries.

Combine that with an influx of talent – the European system has continued to produce NHL-calibre goaltenders in swathes – and you have the foundation for a strategic long-term shift.

I mentioned that this trend has strengthened over the past few years. If we assume that the 2019-20 regular season is complete, then we have our first non-lockout season in which starting goaltenders around the league played less than 60 per cent of total minutes league-wide. (The second table shows each team by year, and yes, that is Martin Brodeur playing 93 per cent of New Jersey’s minutes during the 2007-08 season.) 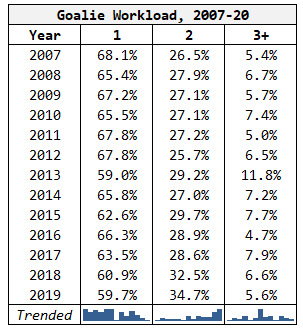 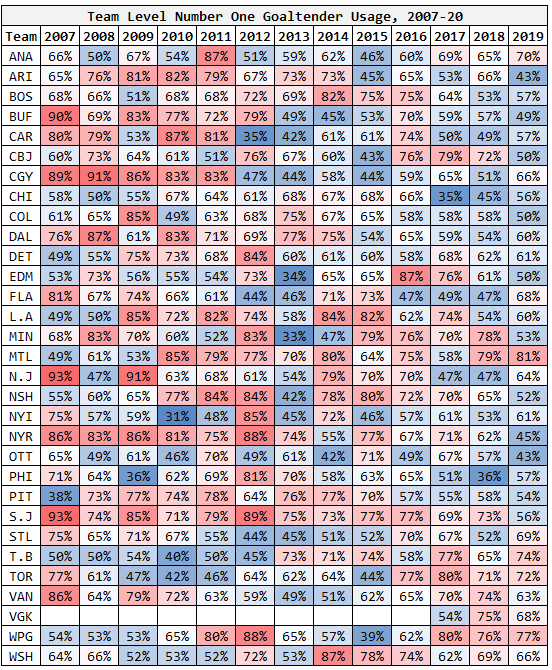 That is a meaningful shift, and something that has ramifications well beyond simple game-to-game coaching strategy.

Some teams are still paying starting goaltenders handsomely – we aren’t a year removed from the Florida Panthers giving Sergei Bobrovsky a $70-million contract, as one example.  But other teams have started to shift their investments, deprioritizing finding the next blue-chip goaltender and instead looking at ways to find multiple capable goaltenders at perhaps a fraction of the cost.

Let’s look at some of the teams who went into a heavy platoon this season. Five clubs – the Arizona Coyotes, Buffalo Sabres, Colorado Avalanche, New York Rangers, and Ottawa Senators – all saw heavily balanced usage at the goaltender position. Compare that to the teams a standard deviation above normal usage rate and compare the performance accordingly:

Teams that went into the season with an expectation of platooning a couple (or, in the Rangers’ case, three) spent about two per cent less against the salary cap than teams with the opposing strategy, and in the process stopped shots more effectively.

Save percentage isn’t a perfect unilateral measure of goaltender performance though, and some teams are obviously situated to make decisions that other clubs can’t – the Winnipeg Jets have the best goaltender in the league on a team-friendly contract, and maximizing his utilization is the best path to a postseason berth.

In this case, I suspect a second front office trend will follow the preceding coaching trend. As teams willingly play starting goaltenders less, premiums will rise for capable backups and platoon options.

Think about what happened in places like Toronto and Vegas this year – two preseason Stanley Cup favourites that were on shaky ground for stretches because the backup situation was miserable. Not surprisingly, both teams paid a mid-season premium to find capable backups in Jack Campbell and Robin Lehner respectively.

In other words: barring the obvious exceptions in cities like Winnipeg, teams are going to need to hold back a little more cap space than they historically would have for platoon/backup options. But pay is a zero-sum game in a hard-cap league, and the contractual bump these players will see should have a corresponding long-term reduction in starting goaltender pay. (Alternatively, teams with space may choose less proportional investment in their skater group.)

All of this is worth keeping in mind as we prepare for an off-season where goaltenders will be available in spades.