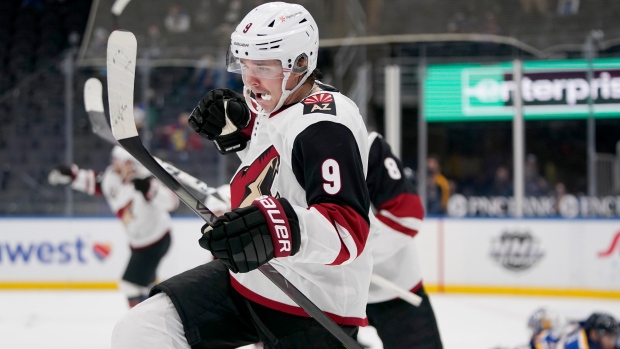 Forward Clayton Keller is expected to play in his first preseason game on Friday since suffering a completely broken femur on March 30, according to general manager Bill Armstrong.

Coyotes GM Bill Armstrong expects F Clayton Keller to play his first preseason game on Friday in Vancouver.
Keller has been practicing with the team, but AZ has been cautious with him after he sustained a completely broken femur on March 30 when he crashed into the end boards.

Keller, 24, suffered the injury after colliding hard against the boards during a 5-2 victory over the San Jose Sharks and missed the team's remaining 15 games of the 2021-22

The seventh overall pick in the 2016 NHL Draft returned to the ice for the start of training camp and has been practicing with the team.

The Flames have assigned goaltender Dustin Wolf to the AHL's Calgary Wranglers on Thursday.

Dustin Wolf has been assigned to the @AHLWranglers.

Sonny Milano and Cody Eakin have been released from their PTO's. #Flames | @GoodLifeFitness pic.twitter.com/QgW6trJOvW

Wolf, 21, was the AHL Goaltender of the Year last season with the Stockton Flames where he put together a 33-9-4 record with a .924 save percentage and 2.35 goals-average.

Additionally, forwards Sonny Milano and Cody Eakin have been release from their professional try-out contracts.

The Oilers have released forward Jake Virtanen from his professional try-out contract, according to TSN Hockey Insider Darren Dreger.

Jake Virtanen has been released from his PTO with the Oilers.

Virtanen, 26, played last season in the KHL with the Spartak Moskva where he had nine goals and 16 points in 36 games.

Drafted sixth overall in the 2014 NHL Draft by the Vancouver Canucks, the 6-foot-1 forward has 55 goals and 100 points in 317 career NHL games in Vancouver.

The Oilers have placed defenceman Slater Koekkoek and goaltender Calvin Pickard on waivers with the intent to assign him to the AHL's Bakersfield Condors on Thursday.

The #Oilers have placed goaltender Calvin Pickard on waivers for the purpose of assignment to the @Condors.

Pickard, 30, signed a two-year, two-way contract with the Oilers on July 13.

The 6-foot-2 left-shot defenceman had four assists in 19 games with the Oilers last season.

The Oilers used these lines during Thursday's practice, according to TSN's Ryan Rishaug.

The Canadiens used these lines for practice on Thursday prior to their preseason matchup against the Ottawa Senators in Newfoundland:

The Senators continue see which combinations of their new-look offence works best for them as forward Tim Stutzle will centre wingers Brady Tkachuk and Drake Batherson on the top line while forward Josh Norris will centre newcomers Alex DeBrincat and Claude Giroux on the second line against the Montreal Canadiens on Thursday.

The Maple Leafs use these lines during Thursday's practice, according to TSN's Mark Masters:

Goaltender Mikhail Berdin will not remain with the Jets during the 2022-23 season per the advice and recommendation of the NHL/NHLPA Substance Abuse and Behavioural Health program.

Per the advice and recommendation of the NHL/NHLPA Substance Abuse and Behavioral Health Program, Mikhail Berdin will not remain with the club for the 2022-23 National Hockey League season.

Berdin will play in the KHL season to remain closer to his family in Russia, according to his agent Dan Miilstein.

Mikhail Berdin is leaving the Winnipeg Jets for 2022-2023 season to be closer to his family in Russia. He will play in the KHL at this time. #WeAreGoldStar!

The 6-foot-2 netminder played last season with the AHL's Manitoba Moose where he had a 19-10-6 record with a .902 save percentage and 2.40 goals-against average.

The Jets have assigned goaltender Arvid Holm to the AHL's Manitoba Moose on Thursday.

TRANSACTION: The #NHLJets have reassigned G - Arvid Holm to the Manitoba Moose (AHL).

Forward Taylor Hall and defenceman Matt Grzelcyk both practiced on Thursday in non-contact jerseys while recovering from their injuries, according to Fluto Shinzawa of The Athletic.

Taylor Hall and Matt Grzelcyk (both non contact) are practicing.

Hall, 30, suffered an upper-body injury during an Oct. 1 preseason game against the Florida Panthers and is considered week-to-week.

Grzelcyk, 28, is recovering from offseason shoulder surgery and returned to the ice for the first time on Oct. 3 for practice.

The 5-foot-10 left-shot defenceman had four goals and 24 points in 73 games last season.

Forwards Joona Koppanen, Vinni Lettieri, defenceman Dan Renouf, and goaltender Keith Kinkaid have been placed on waivers with the intent to assign them to Providence.

The Bruins used these lines during Thursday's practice:

Canes’ Don Waddell says he thinks Derek Stepan will be signed. “It’s just a matter of figuring out the roster for Monday and the cap for Monday”

Stepan, 32, is currently on a professional try-out contract with the Hurricanes.

The 5-foot-11 centre signed a one-year, $1.35 deal with the Hurricanes last season and registered nine goals and 19 points in 58 games.

The Blackhawks used these lines during Thursday's morning skate prior to their preseason match against the Minnesota Wild, according to Ben Pope of the Chicago Sun Times:

I screwed these up earlier. Athanasiou is in Kane's spot. Khaira also scratched

The Avalanche have placed forward Jayson Megna on waivers on Thurdsay.

Looks like Colorado made one cut today. Jayson Megna is on waivers. https://t.co/ftFqjWkwJ0

Megna, 32, appeared in 20 games with the Avalanche last season where he recorded three assists.

He also registered 13 goals and 33 points in 38 AHL games with the Colorado Eagles last season.

The Blue Jackets are expected to use these lines for their preseason game against the St. Louis Blues on Thursday, according to team reporter Jeff Svoboda:

We have loaned the following players to @TexasStars, reducing our training camp roster to 28 players:

After the transaction, the Stars have reduced their training camp to 28 players.

The Panthers have recalled forward Zac Dalpe from the AHL's Charlotte Checkers on Thursday.

• We have recalled forward Zac Dalpe from @checkershockey.

Drafted 45th overall in the 2008 NHL Draft by the Carolina Hurricanes, Dalpe has 14 goals and 28 points in 154 career NHL games split between the Hurricanes, Vancouver Canucks, Buffalo Sabres, Minnesota Wild, Columbus Blue Jackets, and the Panthers.

The Panthers used these lines during Thursday's practice, according to team reporter Jameson Olive:

Here's what I'm seeing this AM:

The Devils used these line during Thursday's morning skate prior to their preseason tilt with the New York Islanders, according to team reporter Amanda Stein:

Here’s how the #NJDevils are lining up at morning skate ahead of the Islanders.

Likely some last-chance opportunities with just one more game after tonight on the preseason schedule. pic.twitter.com/wItLaouLeb

The Rangers have assigned foward Gustav Rydahl to the AHL's Hartford Wolf Pack on Thursday.

Rydahl, 28, was acquired by the Rangers on May 18 as an unrestricted free agent.

The 6-foot-3 centre spent last season with the Swedish Hockey League's Farjestad BK where he registered 15 goals and 30 points in 44 games.

Defencemen Ryan Lindgren (lower-body) and Jacob Trouba (upper-body) did not practice on Thursday and are considered day-to-day, according to Arthur Staple of The Athletic.

Trouba, 28, was named captain of the Rangers in the offseason and he registered 11 goals and 39 points in 81 games last season.

The Rangers used these lines during Thursday's practice, according to Staple:

The Flyers used these lines during Thursday's practice, according to Jordan Hall of NBC Sports Philadelphia:

Lot of moving parts. From what I saw at practice.

The Sharks used these lines on the eve of the season opener against the Nashville Predators in Prague, Czech Republic, according to Sheng Peng of San Jose Hockey Now:

#SJSharks lines, looks like Sturm will replace Svechnikov, only change from Berlin:

The Blues are projected to use these lines in their preseason matchup against the Columbus Blue Jackets on Thursday:

Forward T.J. Oshie (upper-body) and defenceman Dmitry Orlov (lower-body) did not practice on Thursday and are considered day-to-day, according to Tarik El-Bashir of The Athletic.

Oshie (upper body) and Orlov (lower body) are not practicing today. They are considered day-to-day, per the #Caps.