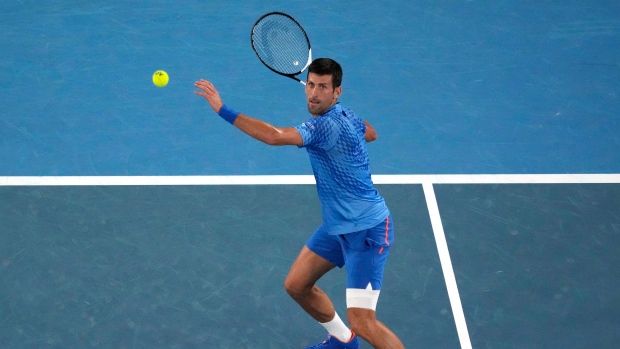 Watch the action LIVE tonight at 7 p.m. ET/4 p.m. PT on TSN1, TSN.ca, the TSN App with bonus streams available on TSN+. You can also view multiple streams at once with the TSN Multiplex.

Djokovic is on familiar ground, as the record-holding nine-time Australian Open champion seeks to break into double-digit titles Down Under.

Here are the marquee matches to watch in the Round of 16:

Alex de Minaur - the last Australian standing in singles at his home tournament and 22nd-ranked player on the men's side - stands between Djokovic and a quarter-finals appearance.

Not including the 2022 Australian Open, where Djokovic was absent due to his COVID-19 vaccination status, he has advanced to at least the Round of 16 of the tournament every year since 2018, with tournament titles from 2019 to 2021.

This is the first career meeting between the two players. This match is scheduled to take place at 3:00am EST / 12:00am PST.

Magda Linette of Poland has already put together her most successful run at a Grand Slam tournament of her career. She has advanced to the third round six times (once at the Australian Open, in 2018) in 29 Grand Slam appearance, but never to the Round of 16.

Garcia has broken the hearts of Canadian fans twice this tournament as she eliminated Katherine Sebov (6-3, 6-0) and Leylah Annie Fernandez (7-6 (7-5), 7-5) in straight sets on Monday and Wednesday, respectively.

On the men's side, a marquee matchup of two top-10 ranked players will also take place.

Fifth-ranked Andrey Rublev saw little resistance from Dan Evans on Friday, as he cruised in straight sets (6-4, 6-2, 6-3) to reach the Round of 16.

The 19-year-old Rune won the only meeting between these two at the ATP Masters 1000 last year in Paris.