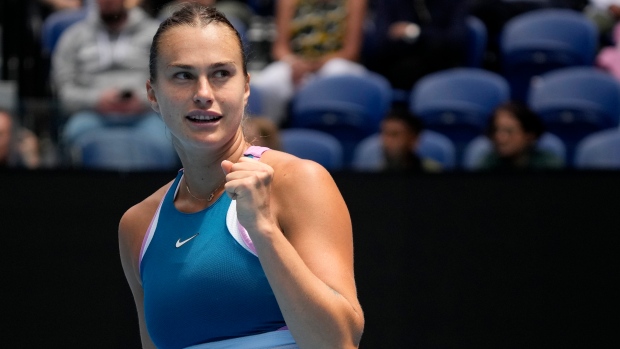 The quarter-final round of the Australian Open wraps up with big names in action on both the men's and women's sides, including fourth-ranked Novak Djokovic against fifth-ranked Andrey Rublev.

Watch the action LIVE tonight at 7 p.m. ET/4 p.m. PT on TSN1/4, TSN.ca, the TSN App with bonus streams available on TSN+. You can also view multiple streams at once with the TSN Multiplex.

Day 9 was headlined by Victoria Azarenka winning an upset over third-ranked Jessica Pegula (6-4, 6-1) in straight sets.

Fifth-ranked Aryna Sabalenka on the women's side will try to book her spot in the semi-final against Donna Vekic of Croatia.

Here are some matchups to watch on Tuesday:

Djokovic rolled past Australia's Alex de Minaur in straight sets (6-2, 6-1, 6-2) on Monday to book his spot in the quarter-finals.

He has topped ranked opponents in two straight matches, but Rublev is the biggest challenge he's faced in the tournament to this point.

This will be the fourth matchup between these two players, and Djokovic has won two of three.

Sabalenka has yet to drop a set this tournament, and she will look to continue the dominant start against 64th-ranked Vekic,

Sabalenka knocked off Belinda Bencic (7-5, 6-2) on Sunday to advance to the quarter-final. She has advanced to the semi-final of a major tournament three times in her career, but have yet to make a final.

Vekic has made a surprising run at the tournament, already matching her previous best result at a major tournament (a quarter-final appearance at the 2019 US Open).

Despite the difference in ranking, Vekic has controlled this matchup historically. In their six professional meetings, Vekic owns a 5-1 record against Sabalenka.