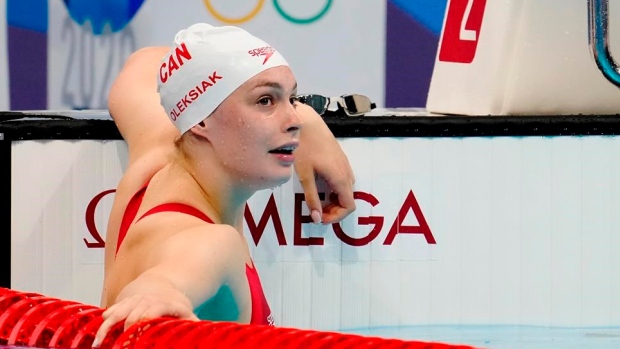 Penny Oleksiak isn't sure what caused the bucket handle meniscus tear she sustained late last month while enjoying some down time in Orlando.

"I was just sitting on the ground and my knee started bothering me," the 22-year-old swimmer said. "It's something that's probably been building for a while, because it happened really randomly. We don't know what really caused it."

Oleksiak flew home and underwent surgery – the first of her life – at Toronto's Women's College Hospital.

"It's only been a couple days, but I heard the first few days are the worst so just trying to enjoy this pain while I can," she said with a smile. "So far so good."

Oleksiak, who took home two silver medals and two bronze medals from the world championships in Budapest in June, is aiming to return to competition next season.

"I'm young and I feel like I heal pretty quickly," she said. "I'm hoping I'll be ahead of the timeline that the doctor gave me. We're definitely aiming for a full recovery for 2023 and working towards that, but not trying to rush anything."

Oleksiak won four medals, including a gold in the 100-metre freestyle, at the Rio Olympics in 2016. She made three more trips to the podium in Tokyo last year to become Canada's most decorated Olympian.

During a conversation with TSN, Oleksiak explained how she'll use the recovery process to get even stronger. She also spoke about her admiration for Serena Williams and how she's diving into the deep end when it comes to nutrition.

TSN: You mentioned in an Instagram post that you plan to get stronger through this recovery process. How will you do that?

Oleksiak: "I'm really trying to focus on everything nutrition and all the foods I can put in my body that will help keep the inflammation down. And also how I can mentally use this time to appreciate the recovery and rehab process. It's something I've never had to deal with. I know it will be a challenge. I'm working with therapists. I already had that lined up, because I know I'll probably have days where I struggle. So, just trying to be appreciative for this time. I'm hoping it will make me appreciate the bigger moments even more."

TSN: What are you looking at when it comes to nutrition?

Oleksiak: "I've taken a big leap into the deep end with nutrition in the last year. I'm working with a holistic doctor. She's amazing. She's taught me a lot about the foods I can put in my body and the foods I can't put in my body just based on blood work and hormones and DNA and everything. She's helped me a lot. I've partnered with a magnesium company, Natural Calm. I got to partner with Hekate with functional mushrooms. I'm a big supplement person. I find functional mushrooms have been a huge game changer for me in my day-to-day life. I love using them in place of caffeine and for recovery. It's something that a lot of people are looking into now and you're seeing a lot more research on it. I'm hoping more people will look into it."

TSN: You put your money where your mouth is by becoming an equity partner in Hekate Sport, a mushroom-powered hydration sports drink, which was founded by Canadian tennis player Vasek Pospisil. What led to that?

Oleksiak: "I've known Vasek for a while. He's such a great athlete and he has so many great people behind him and I trust him a lot. When I was brought this opportunity I was like, 'Oh my gosh, this is something I so align with.' I've wanted to look into getting into that space so it lined up perfectly. I already knew him so it was a great fit."

TSN: How far do you and Vasek go back? How did you guys first meet?

Oleksiak: "A few years. We've had the same manager for a bit and he has always been super welcoming and super open and I feel like we have the same mindset in the business world. I've learned so much from him. He's such a great person, such a great athlete. Everything he's doing is so well thought out and intentional."

TSN: What's it like balancing your athletic career and business interests?

Oleksiak: "It's something so important and something that a lot of athletes don't even realize. You need to keep your mind occupied. As athletes,  we're always striving for greatness. I feel like to take the pressure off a little bit ... you need to be striving for something else outside of that. There's so much to do outside of sport and so many interesting things you can look into, research and put your money into and just learn about. I really enjoy that and with my recovery right now I'm having to find so many new things to be interested in and learn about. It's been really exciting already and it's only been a few days. I can't wait for the next few months."

TSN: Before the injury, you were planning to climb Mount Kilimanjaro in Tanzania to raise funds to support families and communities living on one meal a day. Why is that an important cause for you?

Oleksiak: "I mean, how is it not an important cause, you know what I mean. I was presented the opportunity by one of my partners, Natural Calm, to do this climb. They gave me the option of doing it virtually and just supporting it on socials, but I was like, 'No, that feels wrong. I have to do the climb.' I was super excited to do this climb and educate people on world hunger and on how we can help people without money. You can help people with education and teaching them how to grow their own food, nutrients and medicine and everything. It's something they do every year so I'm hoping next year I can be on that hike."

TSN: We know you're a star in the pool, but what will it take to climb 19,340 feet and reach the tallest peak in Africa?

Oleksiak: "Honestly, I was a little nervous, because it was a last-minute decision. So, I wasn't too prepared. I was going on long walks and getting tips from Natural Calm people who did the hike before. If I'm doing it next year I'll have a full preparation and everything."

TSN: Vasek was just in New York at the US Open. You have attended it as a fan. What was that experience like?

Oleksiak: "It's such a crazy experience. I really love sporting events. I'm always at basketball games and hockey games, but tennis is really fun. It's such a different environment. I went and supported Bianca [Andreescu] there and that was really amazing. I would have loved to go this year. With Serena there and everything, it just seems like such a fun environment to be in and just to watch greatness unfold in front of you."

TSN: The fans play such a big role at the US Open. How do fans influence you during competitions?

Oleksiak: "The fans are huge. I feel like I'm such a 'performing' athlete. I love when you walk out and there's a huge crowd and everyone's cheering. It's really fun to be in that environment and especially representing Canada. I will never get over that, the fact I'm able to race with the maple leaf on my chest. It's always amazing."

TSN: Serena Williams is also a big-game competitor. She'll turn 41 later this month. Will you still be swimming at that age? What do you think about what she's accomplished?

Oleksiak: "It's insane. I've seen all these statistics and how she won her first US Open before LeBron James even made his high school debut. It's amazing because, as a woman, you see someone like that accomplishing so much and just, on her own, building the life she's dreamed of. It's so inspiring to watch. I hope I'm able to be there when I'm her age. I really want to be like her. I really look up to her as a person and as an athlete. I love everything she's doing and everything she stands for. I love Serena."

TSN: What athlete from a sport outside swimming do you admire the most?

Oleksiak: "There's so many athletes that I'm constantly inspired by. I mean, like, how can you not look at someone like Naomi Osaka or Serena Williams and not be inspired by everything they're doing and everything they stand for. Even people like Natalie Spooner or Kia Nurse, I love them. I feel like there's so many women I look at in sport, I look at men too but, like, just seeing these women in sport and what they're able to achieve and sometimes while they're building families and everything like that, it's always so inspiring. It makes me so grateful to be where I'm at and in the position I'm in."