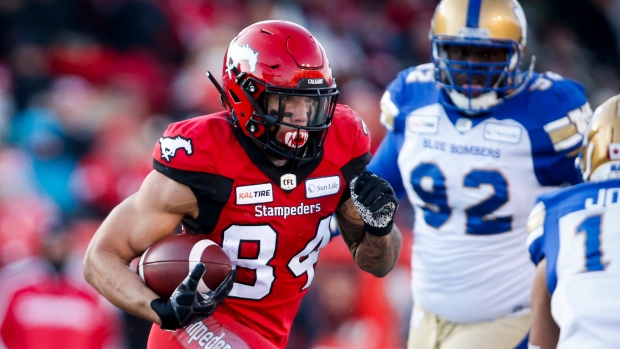 The Calgary Stampeders announced Thursday that they have signed wide receiver Reggie Begelton to a contract that will keep him with the Stampeders through the 2024 season.

The veteran receiver is staying in 🔴⚪️ through 2024!

“Reggie is a very reliable, durable and productive receiver who is an important part of our offence,” said Stampeders president and general manager John Hufnagel in a statement. “I’m very pleased he has made this commitment to the organization and look forward to seeing him continue to perform at a high level over the next two seasons.”

“Dreams do become a reality, so why not dream big, Cowtown?” said Begelton in a statement. “It’s time to bring the championship back home. Let’s go!”

Let’s bring the ‘Ship back to Cowtown 🤠 https://t.co/cxbNucL7CW

The 29-year-old from Beaumont, Tex., led the Red and White with 85 catches in the 2022 campaign, appearing in all 18 regular-season games. A product of Lamar University, Begelton amassed 957 yards and six touchdowns, earning him a CFLPA All-Star honours.

In the five seasons Begelton has spent in Calgary, which included him returning to the team after a stint with the Green Bay Packers in 2021, he has played in 53 regular-season games, recording 243 catches for 3,326 yards and 19 touchdowns. Begelton earned CFL All-Star honours in 2019 and in the same season, became just the fifth player in franchise history to record a 100-catch season, as he finished with 102 for 1,444 yards and 10 touchdowns.