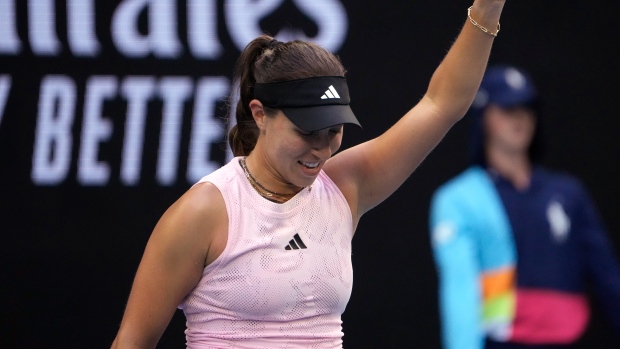 The quarter-final round of the Australian Open gets underway with a couple big names in contention, including third-ranked Stefanos Tsitsipas on the men's side.

Watch the action LIVE tonight at 7 p.m. ET/4 p.m. PT on TSN1/4, TSN.ca, the TSN App with bonus streams available on TSN+. You can also view multiple streams at once with the TSN Multiplex.

Canada's run at the Australian Open ended Saturday, when Felix Auger-Aliassime was eliminated by Jiri Lehecka of the Czech Republic.

On the women's side, third-ranked Jessica Pegula - the daughter of Buffalo Sabres and Buffalo Bills owners Terry and Kim Pegula - seeks her first Grand Slam title of her career.

Here are some of the matches to watch on Monday:

Tsitsipas is the highest-ranked player remaining on the men's side, and after three-straight victories in three sets, he went the distance against Italy's Jannik Sinner (6-4, 6-4, 3-6, 4-6, 6-3) on Saturday.

A victory Monday would advance Tsitsipas to his fourth semi-final at the Australian Open in the last five years. His best finish at a Grand Slam was a loss in the finals to Novak Djokovic at the 2021 French Open.

Lehecka is the 71st-ranked player on the men's bracket, and has snuck into the quarter-finals with victories over three ranked opponents. His most impressive upset came at the hands of Canada's Auger-Aliassime (4-6, 6-3, 7-6 (7-2), 7-6 (7-3)), the sixth-ranked player on the ATP tour.

These two players have met just once in their professional careers; Tsitsipas won in the semi-final round at Rotterdam.

The third-ranked player on the women's tour is Pegula, and a victory against Victoria Azarenka on Monday would ensure she reaches the first semi-final round of her career at a Grand Slam tournament.

Standing in her way is Azarenka, a two-time Australian Open champion, in 2012 and 2013. The former top-ranked player on the WTA now sits at 24.

Azarenka advanced to the quarter-final round, her best result at a major since losing in the finals at the 2020 US Open, by defeating China's surprise story Zhu Lin (4-6, 6-1, 6-4) on Saturday.

This is the fifth meeting between the two players in the last three years - they've each won two of the first four. Pegula topped Azarenka (7-5, 6-4) in the first round of the 2021 Australian Open.