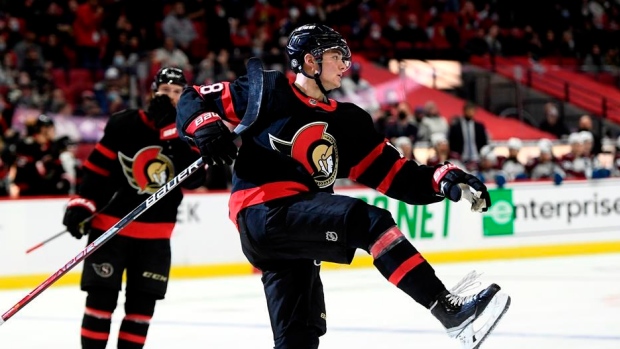 Ottawa’s Tim Stützle is a star in the making. And it seems general manager Pierre Dorion shares that opinion, as the team announced Wednesday a max-term extension for the 20-year old, now signed on a $66.8 million dollar contract through the 2030-31 season.

Stützle entered the league with quite the pedigree. A former third overall pick (2020) whose play with Germany at the IIHF World Junior Championships drew immediate scouting attention from North America. And since entering the league, Stützle has been a solid top-six forward. His sophomore season saw him tally 59 points (22 goals and 36-assists) and just as notably, meaningful developmental steps as a two-way centreman.

If you hadn’t watched much of Stützle last season, you might bristle a bit at the size of the contract relative to his counting numbers. After all, we are talking about a player who was out-scored by players like Florida’s Anthony Duclair and St. Louis’ Brayden Schenn, the latter doing it in just 60 games. And maybe more concerningly, Ottawa again was upside-down with Stützle on the ice. The Senators were outscored 56-44 (minus-12) with him on the ice at even strength last season, begging the question just how impactful the second-year professional was.

But this is where context matters a great deal, particularly for a younger player. Ottawa has been trying to push out of a deep and ugly rebuild for some time now, and the quality of talent around the lineup has been, to say the least, limited. All Stützle has ever known has been a weak blue-line behind him, and only recently has the team put scoring weaponry around him. We know quality of teammates – especially for truly young players – matters a great deal. And such was true for players that pre-dated Stützle’s extension, too. Because if you are going to knock Stützle for being run-over in Ottawa last season, you must consider other players who were ran over early in their careers, too.

If you look at Stützle’s on-ice numbers, it’s clear where the weakness was, and that was on the defensive side. Ottawa bled goals – the weak blue-line certainly contributory, as were a collection of young forwards and some shaky play from goaltender Matt Murray. To that end, let’s differentiate young forwards with upside-down on-ice results into two categories: those who didn’t generate offence, and those who couldn’t stop the bleeding defensively: 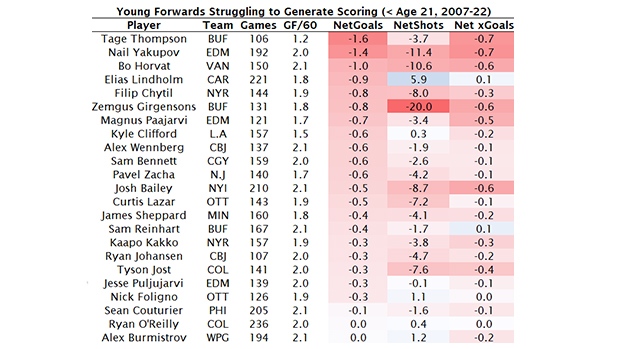 There is plenty of NHL talent on this list, and a few players who ended up becoming real stars. Headlining that list from this group would include Nashville’s Ryan Johansen, Calgary’s Elias Lindholm, Philadelphia’s Sean Couturier, and St. Louis’ Ryan O’Reilly. Interestingly, the latter three players are considered some of the best defensive centres in the league; their sticking power, and why they ended up realizing big contracts, was because they were so tough to score against.

But there are a lot of players whose inability to create offensively stuck with them as they aged into the league. And as the talent around them changed, the defensive numbers they posted early in their careers started cratering. It’s why you see so many players on this list who were (a) drafted high; but (b) have only been able to carve out middle-six or depth-type roles in the league.

Now, the opposite: players who did generate offence, but bled goals against in heavy minutes: 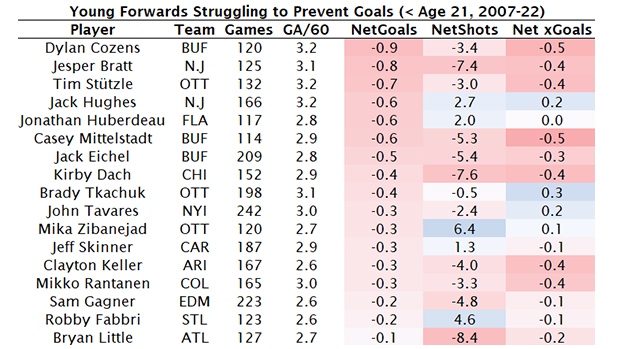 A much more impressive group at first glance. Almost every single one of these skaters has had long-term sticking power and the outliers are to the downside – players like Edmonton’s Sam Gagner, or Buffalo’s Casey Mittelstadt look out of place here.

And then look at the star power amongst the rest of the group. Calgary’s Jonathan Huberdeau just posted a 115-point season. Toronto’s John Tavares will cross the 400 goal threshold this season. Mika Zibanejad has become a star in New York, and on a related note, also an integral piece in what appears to be one of the most lopsided trades of the past decade. Colorado’s Mikko Rantanen? His shoulders are a bit sore this summer from hoisting the Stanley Cup. That’s just for starters.

Another thing that’s not lost on me? Look at the related statistical measures, like net shots and net expected goals. These are always worth checking in on to see if on-ice measures like goals – immensely valuable, but few and far between relative to shots and scoring chances – are lying to us. Consider the two groups based on their pre-age 21 play: 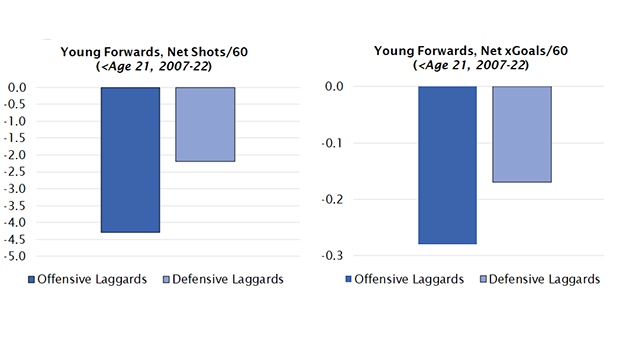 Despite having similar on-ice challenges, the underlying numbers were much more encouraging for the forwards who couldn’t realize defensive success. The defensive laggards were considerably better on both fronts, a strong indication their on-ice numbers were less representative of their overall play than the offensive laggards.

So what’s going on here? There is no exact science (duh) with player evaluation, but a few critical points here:

- Forwards tend to have more individual control over offensive production than defensive production;
- Defensive performance is more fleeting at the team-level than offensive performance, which makes the offensive components a bit more reliable as predictive measures for future play;
- Front offices historically skew pay for forwards based on their individual contributions (i.e. goals and assists); and
- Quality of teammates matter, as always

Something to chew on for that last point: Stützle’s most common year-one linemates were Drake Batherson, Thomas Chabot, Nikita Zaitsev, and Chris Tierney. In year two, that became Alex Formenton, Thomas Chabot, Artem Zub, and Connor Brown, with a little Brady Tkachuk sprinkled in. Big upgrade.

Year three? Early indications his line will feature a 41-goal scorer in Alex DeBrincat and veteran playmaker Claude Giroux. With a heavy dose of the Chabot pairing behind him, Stützle and his playmaking ability are being armed in an incredible fashion.

Ottawa’s trying to front-run a breakout season from Stützle in year three by taking care of his extension a year early.

We will have to wait to see if it’s the right bet, but as a prognosticator considering all of the circumstances, I love Ottawa’s wager here.